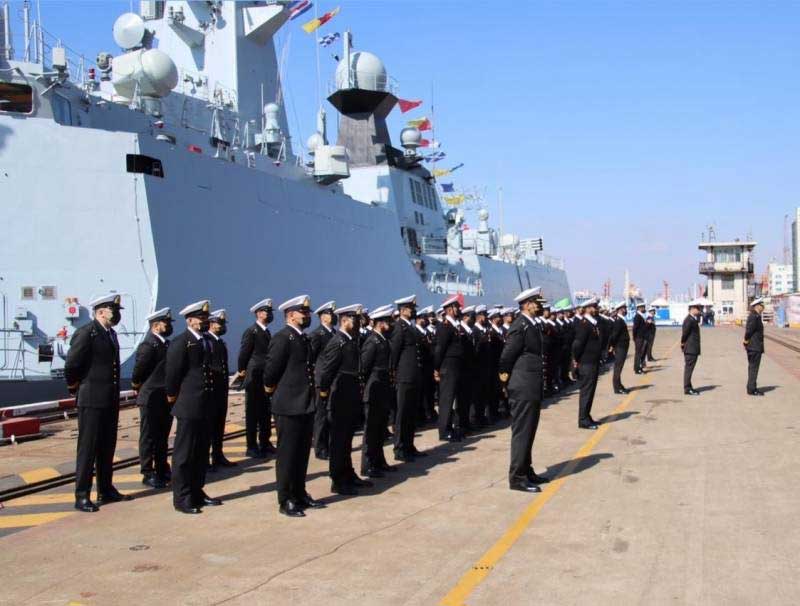 SHANGHAI: Commissioning of Pakistan Navy frigate PNS Tughril held in Shanghai, as China delivered to Pakistan the largest and most advanced warship Beijing has ever exported.
Designed and built by China State Shipbuilding Corporation Limited (CSSC), the Type 054A/P frigate was named the PNS Tughril and it is the first hull of four Type 054 frigates being constructed for the PN.
The ship is a technologically advanced and highly capable platform with enormous surface-to-surface, surface-to-air and underwater firepower, besides extensive surveillance potentials.
Being equipped with state-of-the-art combat management and an electronic warfare system along with modern self-defence capabilities, the Type 054A/P frigate can simultaneously execute a number of naval warfare missions in a highly intense multi-threat environment, Global Times reported on Tuesday.
The frigate is the largest and most advanced warship China has ever exported, CSSC said in a statement.
Pakistan’s Ambassador to China Moin ul Haque said that the commissioning of the PNS Tughril ushers in a new chapter in Pakistan-China friendship that has matured through the test of time and remained steadfast in all domains, according to the statement from the PN.
In the context of the overall security paradigm of the region, Tughril-class frigates will strengthen PN’s capabilities to respond to maritime challenges to ensure seaward defense, maintain peace, stability and balance of power in the region of Indian Ocean, the ambassador said, who also praised the concerted efforts made by China for the landmark achievement by the timely delivery of the well-equipped and potent frigate despite the global pandemic.
Vice Party Secretary and Director of the Board at CSSC Du Gang also applauded the timely construction of PNS Tughril, while emphasising that the commissioning of the ship is a major milestone and a testimony of the China-Pakistan long-lived friendship.
The head of the Pakistan Navy Mission overseeing construction of the 054A/P frigate, Commodore Rashid Mehmood Sheikh, said that the PNS Tughril, being a multi-mission capable frigate, will form the mainstay of the PN fleet while bolstering its maritime defense capabilities.
The delivery of the frigate also serves as a milestone in expanding the influence of Chinese vessels as products and boosting their competitiveness in the international market, CSSC said.
Zhang Junshe, a senior research fellow at the PLA Naval Research Academy, told the Global Times in a previous interview that the Type 054A, on which the Type 054A/P is based, is China’s most advanced frigate.
Compared to previous Chinese frigates, the new ship has better air defense capability, as it is equipped with an improved radar system and a larger number of missiles with a longer range, Zhang said, noting that the Type 054A frigate also has world-class stealth capability. – TLTP

Implementation of digital payment extended for one more month