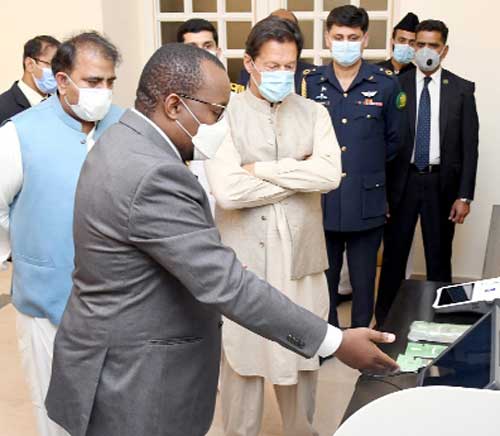 ISLAMABAD: Prime Minister Imran Khan has directed to expedite efforts for embedding the latest security feature into the electronic voting machines, keeping the experience of developed countries into consideration.
The Prime Minister said this while chairing a meeting on Electronic Voting System on Tuesday.
During the meeting, a practical demonstration of the two-way voting system machine was presented to the Prime Minister. The proposed voting system will provide both electronic and paper trail of the electoral process which will ensure safe transparency in the elections.
The meeting was informed that the proposed voting system is being used successfully in a number of countries including Korea. The system also has security certifications to prevent hacking.
The PM expressed satisfaction over the working of the sample machine and lauded the efforts. He said the government is committed to introducing electronic voting machines to ensure transparency in elections. The Prime Minister said that questions were raised on almost every election held in the country, which did not only affect the electoral and democratic process but also hurt the trust of the public.
He said that the electoral and democratic process cannot further afford a system where the process is questionable and in which the people have lost their confidence. In light of the past experience, the Prime Minister said, introducing electronic voting machines will make the electoral process transparent, secured and impartial in every possible way is in the interest of the country and democracy.
Meanwhile, Chief Minister Khyber Pakhtunkhwa Mahmood Khan called on Prime Minister Imran Khan on Tuesday. The meeting discussed provincial issues and the political situation. It also discussed the situation of wheat and the Dera Ismail Khan-Peshawar Expressway project.
Meanwhile, Prime Minister Imran Khan and President of Uzbekistan Shavkat Miromonovich Mirziyoyev will review the entire spectrum of bilateral relations including political, trade, economic, security, connectivity and people-to-people exchanges during a virtual summit on Wednesday (today).
The two sides would focus on enhancing political and strategic linkages, fast tracking transit and trade cooperation, and building educational and cultural collaboration. The Trans-Afghan Railway Project, agreed between Pakistan, Uzbekistan and Afghanistan earlier this year, is a key area of focus.
Besides bilateral matters, the two leaders will exchange views on key regional and international issues. They will also deliberate on enhancing mutual cooperation and coordination at international and regional fora. The virtual summit will provide an opportunity to further build on existing bilateral cooperation in all areas of common interest.
Relations between Pakistan and Uzbekistan are rooted deep in common faith, shared history, and cultural affinities providing a firm foundation for increased cooperation. The two countries have increased interaction at all levels over the past two years.
The two leaders had earlier met on the sidelines of the 19th meeting of the Council of Heads of State of SCO Member States in Bishkek on June 13-14 ,2019 and the Belt and Road Initiative (BRI) Forum in Beijing on April 26-27, 2019.
The two countries have increased interaction at all levels over the past two years. The foreign minister of Uzbekistan visited Islamabad on March 9-10, 2021 to hold bilateral talks with Foreign Minister Makhdoom Shah Mahmood Qureshi. During the visit, he also met the Prime Minister and delivered an invitation to attend the Central Asia South Asia Regional Connectivity Conference, to be hosted by Uzbekistan in Tashkent in July 2021. – TLTP