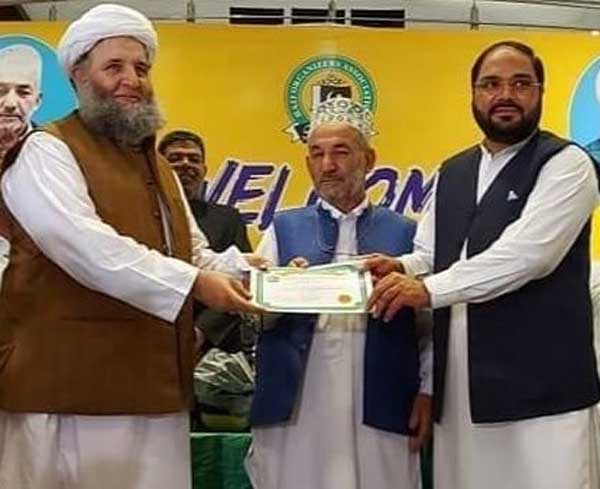 PESHAWAR: The government will not increase Hajj and Umrah expenses. We will do our best to provide the best possible facilities. We are in contact with the Saudi government. These views were expressed by Federal Minister for Religious Affairs and Minority Affairs Dr. Pir Muhammad Noor-ul-Haq Qadri while addressing as Chief Guest at the oath ceremony of newly elected leadership of Hajj Organization Association of Pakistan (HOAP), says a Press release.
The ceremony was presided over by Haji Masood Khan Shinwari, the newly elected President of HOAP. Dr. Pir Muhammad Noor-ul-Haq Qadri administered oath to the newly elected leadership and while congratulating them, expressed his determination that the newly elected leadership would work with the government to play its full role in providing all possible facilities to the pilgrims.
Haji Masood Khan Shinwari, the newly elected President of HOAP, apprised the Federal Minister of the problems and difficulties faced by the Hajj companies and pilgrims. He assured that all legitimate issues would be resolved.
Dr Pir Mohammad Noor-ul-Haq said that Corona virus is an epidemic which has spread all over the world. By the grace of Allah Almighty and with the cooperation of the Pakistani nation, Corona virus has been overcome to a great extent. After being deprived of Hajj twice, there is now hope that the ban on Hajj and Umrah will be completely lifted.
He said that I assure the pilgrims of Hajj and Umrah that In Sha Allah we will do our best for better facilities. At the governmental level, we and the Saudi government have close ties. As a first step in the Hajj, talks will be held at the level of secretaries and in the second phase, talks will be held at the ministerial level. I sincerely hope that all matters will be settled amicably.