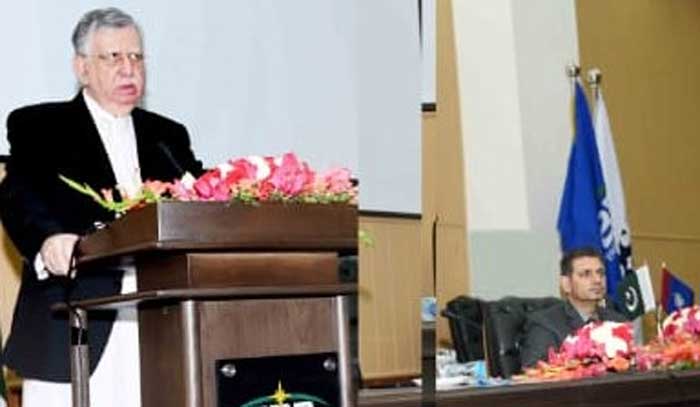 ISLAMABAD: The incumbent Government was fully committed to grant Federal Board of Revenue operational and financial autonomy in order to rule out the possibility of political interference and thus make it an efficient, merit based, service oriented and public friendly organization. This was stated by Federal Minister for Finance & Revenue Shaukat Tarin while addressing the senior officers at FBR Headquarters Islamabad. He appreciated last year’s commendable performance of FBR regarding collection of revenue target despite challenges posed by Covid-19. He also stated that FBR was on track for achievement of this year’s target of Rs. 5829 billion as FBR had already surpassed the target with a margin of Rs. 160 billion in the first two months.
“The Broadening of Tax Base is one of the top priorities of my team for the current year and we have constituted committees comprising of private sector experts, NADRA and FBR officers who are working tirelessly.”
While elaborating the function of these committees, he added that these committees are also working on the assessment of resource constraints of FBR, especially the finances and the logistics, and they would be recommending the ways and means to overcome these constraints. “The other flagship initiatives is Point of Sales Integration which aims at recoding the real time transactions at retail level and has huge potential to increase the revenue of the state,” he continued.
Finance Minister also briefed about the progress on Track & Trace project which would be rolled out from November as the stay granted by one of the Honorable High Court had been vacated and he had also approved funds of Rs. 432 million for the project. Highlighting the importance of digitization of FBR, Finance Minister stated that automation in tax system would bring transparency and reduce the discretionary powers which had always been a long-term demand of business community. He expressed his commitment to provide required funds for digitization and added that Technical Supplementary Grant of Rs. 3.8 billion had already been approved in the current week to upgrade the IT Systems and their security.
Commenting about Pakistan Single Window (PSW) project, he stated that under PSW, more than 70 different departments would converge on one platform for the facilitation of business community, which would promote trade in the country. He urged FBR to follow an ambitious target of taking Tax-to-GDP ratio to 20% in next 6-8 years. The Finance Minister also appreciated FBR for making significant headway towards harmonization of sales tax between the Federation and the Federating units under the umbrella of National Tax Council (NTC).
He appreciated the Integrated Transit Trade Management System (ITTMS) and called it a land mark project, which would connect the whole region from Central Asia to South Asia after its completion. He further stated that Anti-smuggling and counter-smuggling initiatives are one of the top most priority areas and the Prime Minister is very concerned about it. He appreciated FBR’s efforts to curb smuggling despite resource constraints. He paid tributes to the sacrifices by Customs officials who laid down their lives in the line of duty. While concluding his address, he hoped that team FBR would spare no effort or avenue to not only achieve the assigned revenue target of 5.8 trillion but also exceed the same by wide margins.
Earlier, Chairman FBR, Dr. Muhammad Ashfaq Ahmed welcomed Federal Minister for Finance & Revenue in FBR. He stated that the interactive session with the Finance Minister would provide an opportunity to the senior leadership of FBR to understand his vision and thus would help take his vision forward. Chairman FBR in his address elaborated that the government’s priority was to create an enabling environment for the trade and businesses, especially for the SMEs through simplifications of laws & procedures, and to stimulate economic activity. “FBR being cognizant of this vision, has taken a number of concrete measures to translate it into reality,” he added.
Chairman FBR while acknowledging the result-oriented vision of the Finance Minister stated that under his dynamic leadership, much needed economic stability had been achieved which was rather elusive before. “Now the country is on the path to economic growth,” he added. He hoped that growth trajectory would bring about prosperity, resulting in employment and economic empowerment of people.
While concluding his speech, Chairman FBR assured the Finance Minister that team FBR was fully geared towards achievement of target for this year as well. “We are on track and would not leave any stone unturned for surpassing the historic milestone of Rs. 5.8 trillion,” he concluded.

Transactions worth Rs8bn made through rickshaw driver’s A/c