MILAN (Italy): Tehreek-e-Kashmir Italy organised a huge rally for the solidarity of occupied Kashmiri people here at Milan near to the Indian Consulate office, here Sunday. Jamat-e-Islami, PTI, PPP, and Muslim League-N, and Sikh community members contributed to this rally. There was a well enough quantity of women’ from Pakistani, Bangladeshi, and Arabic community.
Tahir Mahmood, Ameer Jamat-e-Islami Italy and president Tehreek-e-Kashmir Italy, said in a media talk that the credit of this gathering goes to the community members, because they managed it in a proper way. He said that our Italian community arranged 25 buses from the different locations, only 17 buses are from Brescia, rest of 2 buses from Bologna, 1 from Parma, 1 from Bassano, and 1 from Malo, and 3 from other cities.
Answering a question, he said that, 5 February was a working day and it is hard to arrange a huge crowed for any purpose(s), more or less all community members are working locally and the only day is Sunday, when we can organise community programmes.
In addition, Tahir Mahmood said that local Italian government bodies are so cooperative, even though Indian community members and spy men were against to this programme and they tried their best to not issue NOC, but we got it quickly without any issues.
He said, we every year visit twice to Geneva-Switzerland, and Brussels. We organised a successful Kashmir conference at Brescia and in Milan. We come from different parts of the Europe for a single purpose and that is freedom of Kashmir. He said, we want freedom at any cost-and we will roll out our programme over the Europe, we are peaceful citizen of Italia and Pakistan. We are talking about the human rights, we aren’t talking about race and religion. These countries are well informed about the current situation of Kashmir. There is lockdown for months. There are human right issues I Kashmir.
Sikh, Bangladeshi, and Arab community members were in huge numbers. Answering to the question Tahir Mahmood that we have only moral support from our embassy and consulate, but our community support us financially.
Bangladeshi women social activist Fatima spoke about the sacrifices of Kashmiri people. She added that for last 72 years more than 100,000 people embraced Shahadat, thousands of injured, more than 10,000 women were raped. Those all are our brothers and sisters. I assure that we are, and we will be with them in all situations. She added that we want peace, love, and solidarity. We lost many precious lives, while talking, she became emotional and said one day we all will die, and the best way is to help others and in this situation if you die, you be in paradise.
Muhammad Sharif Khan Abbasi said in a private message that Modi is the worst ruler of India. We should thankful to Narendra Modi, because of he highlighted Kashmir issue internationally. And now it’s the real peak time for Kashmir freedom
Faheem Kiyani, president Tehreek-e-Kashmir United Kingdom, was the chief guest of this programme. He also added his sentiments for the solidarity of Kashmiri people. 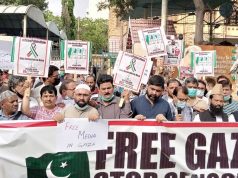