Renowned journalist and Editor of a national English daily, Arif Nizami has been elected as the president of the Council of Pakistan Newspaper Editors (CPNE). Other elected office-bearers include Senior Vice President Imtinan Shahid and Secretary General Dr Jabbar Khatak.
In a congratulatory message to the newly-elected body, Prime Minister Imran Khan hoped that CPNE will play an active role under Nizami’s leadership.
“It is also hoped that the new CPNE body will proactively work for promotion of journalism in Pakistan,” Imran said.
PM’s Special Assistant on Information Firdous Aashiq Awan also extended greetings to the newly-elected office-bearers of CPNE.
In her message, Awan hoped that the CPNE led by Arif Nizami would make efforts for resolving issues facing the newspaper industry.

Pakistan all-rounder star, Shahid Afridi, launched his autobiography ‘Game Changer’ during the week describing his marvelous career, some controversial secrets and honest opinions about the Pakistan national cricket team. His story was co-written by the renowned journalist, Wajahat Saeed Khan, where Boom Boom Afridi narrated everything from his childhood to his cricketing career.
Afridi blatantly revealed some shocking information about the weaknesses, hypocrisy and spot fixing in the national team. Former skipper talked about the ICC World Cup 2003 debacle stating that Waqar Younis leadership sunk the national team in the tournament. He believed that Waqar lacked unity and could not fight the dressing room politics which he, himself, is responsible for. He had no leadership skills to lead the team.
“Unfortunately, he hadn’t let go of the past,” he talked about the legendary pacer. “Waqar and I had a history, dating all the way back to his tiff with Wasim over the captaincy crown. He was a mediocre captain but a terrible coach, always micromanaging and getting in the way, trying to tell the captain – me – what to do… It was a natural clash and it was bound to happen.”
Afridi shed some light on the legendary cricketer Wasim Akram as well describing that everyone wanted him to lead the team instead of Waqar Younis but politics former Pakistan Cricket Board (PCB) chairman of the PCB, Lt Gen. Tauqir Zia, sided with Waqar which cost the national team in the field.
Shahid Afridi praised former captain turned Prime Minister Imran Khan in his book stating that Imran never interfered in personal matters nor got personal with any player, same as he is running his cabinet today. He applauded his efforts for peace with the neighbour India and ideas for Naya Pakistan.

Karachi University’s Vice-Chancellor Dr Ajmal Khan passed away during the week after a cardiac arrest. Earlier, Dr Ajmal Khan was shifted to a private hospital after chest pain.
His funeral prayers were offered after Asr prayers at Karachi University’s central masjid, Masjid-e-Ibrahim. Sindh Governor Imran Ismail and others attended the funeral.
Dr Ajmal Khan was awarded ‘Pride of Performance’ in 2001 for his contributions to the science department and was also conferred with ‘Sitara-e-Imtiaz’ in 2007.
Dr Ajmal Khan had also served as the head of department and as a visiting faculty in different institutions of numerous countries. He was appointed as the vice chancellor of Karachi University in January, 2017 and was the 17th VC of the University.
Sindh Governor Imran Ismail expressed his condolences on Twitter and termed the death of Dr Muhammad Ajmal Khan a great loss for the country. “He was a prominent Botanist and had been working hard to improve the standard of the university. He shall be missed. May his soul rest in peace.” he wrote. 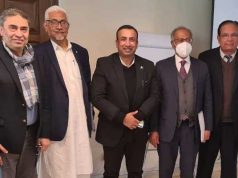 Rs2.5bn in duty drawback to be paid in 3 stages: Hafeez

Gold rebound on course as dollar wilts from stimulus anticipation