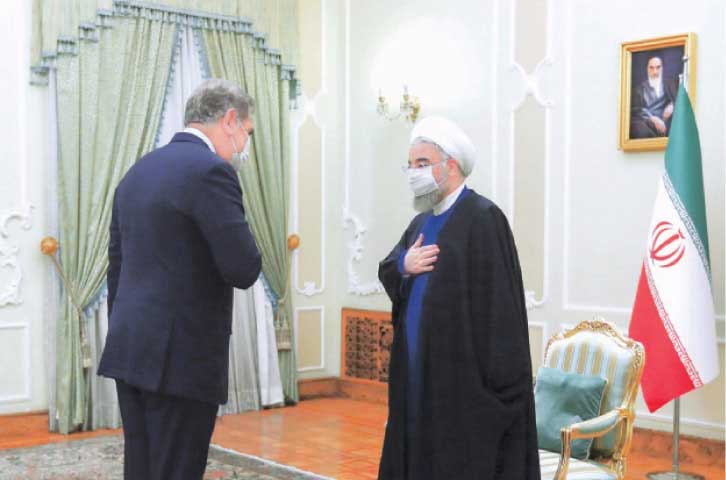 ISLAMABAD: Iranian President Hassan Rouhani has said that security is a common concern of both Pakistan and Iran and it is necessary to strengthen cooperation in this area.
He was talking to Foreign Minister Shah Mahmood Qureshi who called on him at the presidential palace in Tehran on Wednesday.
President Rouhani reaffirmed his country’s commitment to strengthening relations with Pakistan in the areas of trade, investment and border management.
Referring to the US decision to withdraw from Afghanistan, Rouhani said that the US military presence in the region has not helped maintain security and stability. “Iran and Pakistan, as the most important and effective neighbours of Afghanistan, must play their role in managing the peace process in this country through interaction and cooperation,” the president noted, adding, “The Islamic Republic of Iran welcomes cooperation with Pakistan and Afghanistan to play its role in this regard.”
Referring to the previous agreements between the two countries in order to develop cooperation, Rouhani stressed the need to implement the agreements. He also announced the readiness of the Islamic Republic of Iran to meet Pakistan’s energy needs.
Qureshi, for his part,described the relations with the Islamic Republic of Iran as unique, valuable and fraternal and emphasised strengthening and consolidating these relations in all fields.
Referring to the emphasis of Pakistani Prime Minister Imran Khan on the further development of relations with Iran, he expressed hope that in the near future, bilateral relations will enter a new phase, especially in the trade and economic fields.
Appreciating Iran’s stance in support of Pakistan on regional and international issues, Qureshi declared his country’s support for the JCPOA as a major achievement of world diplomacy. “We are very pleased that the JCPOA has been preserved through Iran’s efforts and that we are witnessing renegotiations today to revive this multilateral agreement,” the foreign minister said.
Qureshi said that both the countries enjoy cordial and strong relations deep rooted in common history, culture, faith and language. He thanked the Iranian leadership for consistently supporting the principled stance of Kashmiri people.
Pakistan’s Ambassador to Iran Rahim Hayat Qureshi was also present during the meeting.
Separately, during a meeting with the Pakistani diplomats in Tehran at Pakistan House, Qureshi said that the establishment of trade centres at the Pak-Iran border would not only boost trade between the two countries but also bring economic change in the lives of the residents of border areas.
“Pakistan and Iran enjoy deep-rooted fraternal ties based on common religious and cultural values and civilisation,” the foreign minister said.
Qureshi said his visit to Iran is aimed at strengthening economic and trade relations between Pakistan and Iran. “Iran has not only appreciated the proposal for the establishment of trade centres at Pak-Iran border but also agreed to implement it soon,” the FM said.
Meanwhile, Pakistan and Iran signed a memorandum of understanding (MoU) to set up bazaars in the border areas between the two countries, in their aim to bolster economic ties between the two states.
The MoU was signed on Wednesday during Foreign Minister Shah Mehmood Qureshi’s official tour of Iran where he met Iran President Hassan Rouhani and other senior members of the Iranian government.
According to the MoU, Pakistan and Iran have agreed to establish joint border markets along the common border between the two states. Accordingly, in the first phase, three bazaars will be opened in the border points of Kuhak-Chadgi, Rimdan-Gabd and Pishin-Mand areas.
In the second phase of the plan, joint border bazaars will be established in three other border points later. These markets will be managed by the methods agreed upon by the two countries.
Iranian Foreign Minister Javad Zarif tweeted about the MoU as well and shared pictures of him and Qureshi signing the official document. – TLTP