DAVOS: Foreign Minister Shah Mahmood Qureshi on Wednesday said that Prime Minister (PM) Imran Khan has raised important issues during meeting with United States of America president Donald Trump.
In a statement, the minister said that President Trump has assured to visit Pakistan soon to strengthen mutual ties. Trump has also expressed concerns over the escalating unrest in Indian-occupied Kashmir, he added.
FM Qureshi further told that Pakistan has also discussed Financial Action Task Force (FATF) matter with the US president.
Earlier, US President Trump again offered to play the role of a mediator between Pakistan and India on the matter of Kashmir and said the US is keeping a “close watch” on the matter.
“What’s going on between Pakistan and India … if we can help, we certainly will be willing to. We have been watching it very closely and it’s an honour to be here with my friend,” he added.
PM Imran and President Trump had interacted in a highly cordial atmosphere with the press where Trump appreciated PM Imran, whom he referred to as his ‘friend’.
PM Imran expressed that the matters pertaining to Afghan Peace Process, deteriorating situation in Kashmir and regional situation will be discussed as Pakistan has an important relation with the US.
Trump also underscored the relationship with Pakistan and expressed: “Never been this close as we are now”. Both leaders extended warmness towards each other and announced to pay heed to crucial issues.
Meanwhile, Foreign Minister Shah Mahmood Qureshi on Wednesday emphasized the importance of maximum restraint and steps for de-escalation by all sides in the Middle East.
During his telephonic conversation with British Foreign Secretary Dominic Raab on Wednesday, he said that situation in Gulf region carries serious implications for the peace and security as well as world economy.
He also apprised the British foreign secretary about evolving security situation of the region and shared Pakistan s concerns with regard to the latest developments in the Middle East.
Qureshi also apprised of Pakistan’s efforts to defuse tensions in the region through active diplomatic engagement with relevant parties.
Shah Mahmood Qureshi also highlighted grave human rights and humanitarian situation in IOJ&K, and urged UK to play its role in peaceful resolution of the Jammu and Kashmir dispute.
Shah Mahmood Qureshi also briefed his British counterpart on Pakistan’s efforts in the peace and reconciliation process in Afghanistan.
The Foreign Minister invited Foreign Secretary Dominic Raab to visit Pakistan at his earliest convenience.
British Foreign Secretary appreciated Pakistan’s efforts to support diffusion of tensions and secure peace and security in the region.
He also highlighted the positive trajectory of Pak-UK relations and expressed hope that these will continue to strengthen in the years ahead.
The two Foreign Ministers agreed to continue to work together to strengthen bilateral cooperation and to ensure peace and security of the region. – NNI 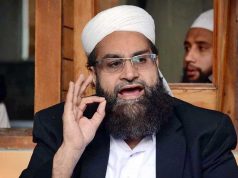