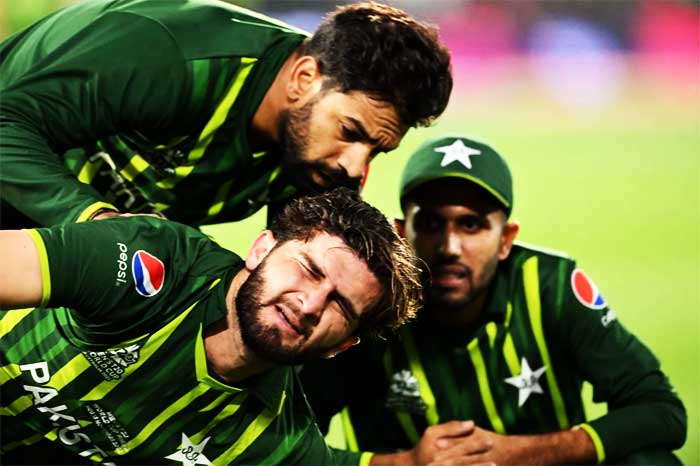 MELBOURNE: England defeated Pakistan in a tense T20 final in front of 80,462 at MCG by 5 wickets on Sunday. Match winning performance by Sam Curran as he was outstanding on a pitch with inconsistent bounce, little bit of movement and where the ball was turning. Curran dismissed three batsmen for only 12 runs in his four overs.

Ben Stokes played a match winning innings scoring 52 in 49 deliveries and remained not out. Shaheen Shah Afridi‘s injury after his spell of 2.1 overs claiming one wicket was devastating blow for Pakistan to stop the run chase of England tough they were in a comfortable position at this stage.

Put into bat Pakistan made 39 for the loss of Rizwan.
Adil Rasheed took 2 wickets for 22 dismissed Babar Azam, 32 off 28 balls, and Mohammad Haris. Shan Masood made 38 off 28 deliveries whereas Shadab Khan scored 30 off 20 balls. Pakistan batters were under pressure and England’s bowlers did not give much space to score freely.

Pakistan was 119 for four after 16th over batted poorly and managed to score only 18 runs for the loss of four wickets in the last four overs. Pakistan played 48 dot balls and were restricted to 137 for the loss of 8 wickets.

England lost Alex Hales, Phil Salt and Jos Buttler in power play at the score of 49. Buttler in 17 balls made 26 runs. Left hander Moeen Ali made 19 of 12 balls and Harry Brook scored 20 off 23 deliveries.

England achieved the target with one over still to go scoring 138 for the loss of 5 wickets. Sam Curran was declared Man of The Match. Pakistan played and fought well despite defending low score due to poor performance of the middle order batters.
England now are the ODI and T20 Champions, a team to achieve the rare feat.