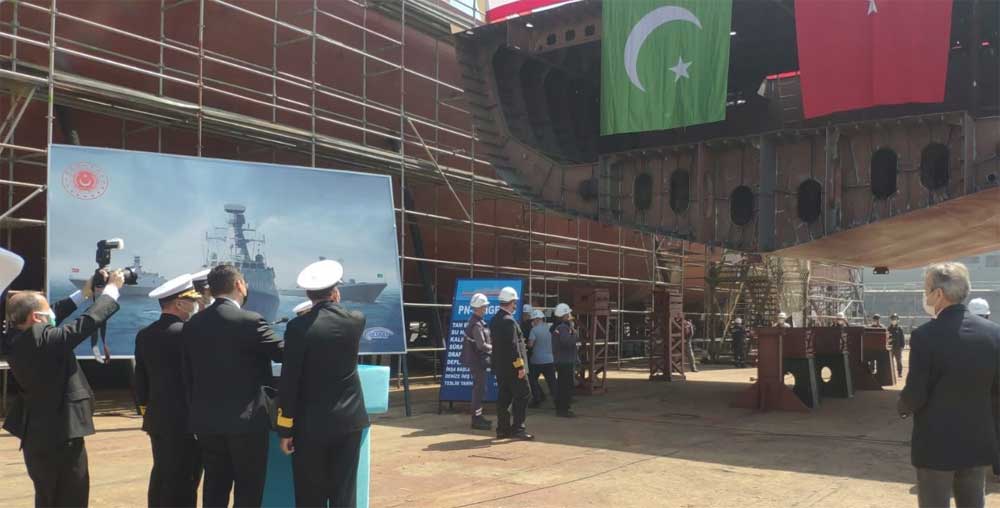 ISTANBUL: Keel laying ceremony of the second MILGEM Class Corvette being constructed for the Pakistan Navy was held today at Istanbul Naval Shipyard (INSY), Turkey, says a Press release.
Commodore Ehsan Ahmed Khan, Chief Naval Overseer (Turkey) of Pakistan Navy stationed at Istanbul Naval Shipyard was the chief guest. Senior management of M/s ASFAT, INSY, representatives from Turkish Lloyed and other dignitaries as well as Naval Attache of Pakistan Embassy Ankara Captain Mazhar Bashir attended the ceremony.
While addressing guests at the ceremony, Commodore Ehsan said today’s event is a defining moment to further cement the bonds of brotherhood and friendship between the two strategically aligned nations with common values, culture and faith. He acknowledged the commitment and dedication of M/s ASFAT, INSY and Turkish Ministry of National Defence for meeting the challenging construction schedule despite ongoing global pandemic.
The event marked an important milestone in the construction schedule for the 2nd MILGEM Corvette for the Pakistan Navy. Pakistan Navy has concluded a contract with M/s ASFAT for construction of four corvettes out of which two are being constructed at INSY whereas the remaining two are being constructed at Karachi Shipyard and Engineering Works. These corvettes will be fitted with state-of-the-art surface, sub-surface and anti-air weapons and sensors integrated through an advanced Network Centric Combat Management System.
The induction of MILGEM corvettes will significantly enhance maritime defence and deterrence capabilities of Pakistan Navy which will ensure secure and stable seas. These corvettes will become a core element of Pakistan Navy’s kinetic response to traditional and non-traditional challenges and to maintain balance of power in the Indian Ocean Region.

All Debt Repayments Are On Track, Country’s FE Reserves Set To Rise:SBP

Why Can’t We Beautify The City Of Ours Like Dubai Did: Governor Sindh Tessori

All Debt Repayments Are On Track, Country’s FE Reserves Set To Rise:SBP