A Paramount Leader of China

Xi Jinping was born in Beijing but his family has roots in Shaanxi province. His father, Xi Zhongxun was a leader of the Communist party from its earliest years rising to be Vice Chairman of the NPC. His father had friendly relations with the Dalai Lama and was jailed during the Cultural Revolution. Xi Zhongxun went on to manage the creation of the Special Economic Zones (SEZ) in Guangdong under Deng Xiaoping’s leadership.
At the age of 16, Xi Jinping worked in Shaanxi while his father was in jail. In 1975, at the age of 22 he returned to Beijing to study Chemical Engineering at Qinghua University. He went on to take junior posts in the Communist party in Shaanxi; Hebei; Fujian and Zhejiang. In 2006 he was appointed party secretary in Shanghai. This was a significant step as it is the natural stepping stone before joining the ruling SCP. Seen as a safe pair of hands and untainted by political scandal he rose to be the heir apparent to Hu Jintao. He is perceived as competent, easy-going and affable with a large network of contacts. Broadly his policy is characterized as economically liberal but politically conservative. He has promoted the aspiration to a ‘Chinese Dream’ somewhat akin to the American Dream where anyone can aspire to be rich by hard work. He has launched initiatives against corruption which have led to the downfall of some noted senior figures within the party such as Bo Xilai. He likened his attitude to government in 2014 to ‘frying small fish’ – as the fish are delicate only the gentlest of cooking is needed, so it expressed a need for small, subtle government.
Since 2016 he has taken on more personal power than his immediate predecessors. He does no consult other senior figures in the party and has been given the honor of having his ‘thought’ embedded in the constitution of the country rather like Mao Zedong.
Xi became President in 2013 and is likely to serve the normal term of ten years. However in February 2018 his term was made indefinite. He is the third successive president to have an engineering degree. He has married twice, his second wife Peng Liyuan is a famous singer. They have one daughter, Xi Mingze, who studied at Harvard University.

I congratulate His Excellency Li Bijan, Consul General of China in Karachi and the brotherly Nation “China” on behalf of Karachi Editors Club on a very memorable day of the present-day history of China, 71st Anniversary of Independence of Republic of China.I believe the both nations have remarkable diplomatic achievements in seven decades.
This tested friendship is becoming an example in south Asia Region.Pakistanis consider always that future of Pakistan is more safe and secure with China as compared to the other world, that’s why the China-Pakistan Economic Corridor is becoming the path of progress and prosperity.
There are many success stories between the two countries which started on the border treaty in 1962 and then the Karakorum Highway built by both countries jointly and successfully. This Highway is not merely a road but it depicts the love and sacrifice for the future endeavours.
We salute the Unsung Heroes of both Nations who were given their lives to build this path of friendship.
It’s a matter of rejoice for the youth of both countries that the CPEC projects will open the new horizons of opportunities.GwadarPort project will be another landmark of mutual interest and progress.
We believe the cooperation at all levels between Pakistan and China will be beneficial for less privilege people of both the countries. Karachi Editors Club welcomes the Pakistan-China Media Corridor concept to enhance the bilateral cooperation.Long Live Pak-China Friendship.

Respecting and Protecting the Rights of All Ethnic Groups in Xinjiang

Glorious century of the Communist Party of China 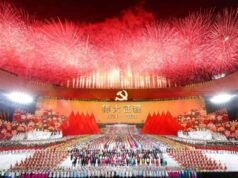 The “Quad” and the Gwadar Port