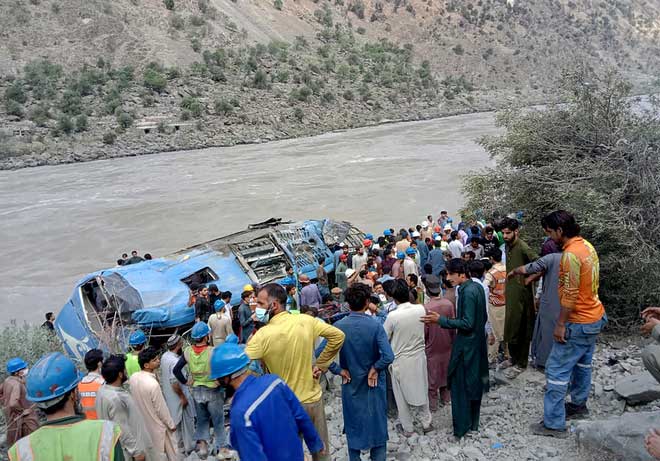 KOHISTAN: At least 13 people, including Chinese engineers and Pakistani soldiers, lost their lives and more than 30 people got injured following a fatal blast on a bus that was travelling to Dasu hydropower plant Wednesday.
The bus exploded at around 7:30 am and claimed the lives of at least 13 people, with nine Chinese engineers among the dead, as well as two Pakistani soldiers, and two other local citizens. The vehicle was transporting the workers to the hydroelectric Dasu Dam, located in the Kohistan district.
However, the Foreign Office (FO) said the bus “plunged into a ravine after a mechanical failure resulting in leakage of gas that caused a blast”.
The FO said local authorities are providing all assistance to the injured and the Ministry of Foreign Affairs is in close “contact with the Chinese Embassy for coordination and facilitation”.
“The government and people of Pakistan extend sincere condolences to the families of Chinese and Pakistani workers who lost their lives in the incident. We also pray for quick recovery of the injured,” said the FO.
Deputy Commissioner Arif Khan Yousafzai confirmed the deaths of 12 people and said nine Chinese workers and three locals were among the dead. He added that the bus was carrying more than 30 people at the time of the incident.
“Police and the bomb disposal squad are at the site; as soon as the report from the investigation comes, we will be able to tell you the factual position,” added Yousufzai
The DPO Upper Kohistan also said the cause of the incident is being investigated. Other police officials said that rescue and security personnel reached the site soon after the incident.
The dead and injured, including the Chinese engineers, were brought to the Regional Health Centre in Dasu, about 10 km from the incident site.
Soon after the incident, a high-level delegation of the KP government reached Kohistan on the instructions of Chief Minister Mehmood Khan. The delegation included Special Assistant to Chief Minister KP for Science and Information Technology Kamran Bangash, chief secretary and KP inspector general of police.
Bangash said the media would be apprised of the situation after the matter is investigated.
An emergency statement was posted by the Chinese Embassy in Islamabad in response to the attack, stating: “Recently, personnel of a project of our company in Pakistan have been attacked, causing casualties among our citizens. The Chinese Embassy in Pakistan urgently reminds Chinese citizens,enterprises and projects in Pakistan to… pay close attention to the local security situation [and] strengthen the safety of project personnel.”
Meanwhile, Beijing has asked Pakistan to thoroughly investigate the incident, China’s foreign ministry said. China’s Foreign Ministry Spokesman Zhao Lijian, in a news briefing, said China has asked Pakistan to protect the safety of Chinese personnel, institutions and projects.
Chinese engineers and Pakistani construction workers have been working on the Dasu hydroelectric project and several others for several years in the region. Security of Chinese workers has long been an issue of concern in Pakistan, where Beijing has poured in tens of billions of dollars in recent years, and large numbers of Chinese nationals are now based in the country to supervise and build infrastructure projects. TLTP