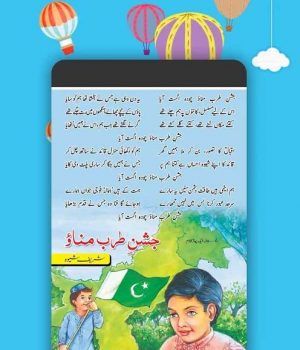 KARACHI: Pakistan’s premier children’s monthly, ‘Mahnama Sathee’ has launched the magazine’s smart mobile application to promote Urdu reading and writing among children, achieving a milestone in the history of Urdu literature produced for schoolchildren and young adults. A mobile-based app downloadable in Google Play, the app allows children and their parents to browse the best Urdu literature, comprising both children’s classics and contemporary fiction now available on a single tab, says a Press release.
Speaking on the launching ceremony of the app today, Abdul Rehman Momin, Editor, Mahnama Sathee, said despite the fact that the modern, digital age is ruled by smartphones and high-tech telecommunication devices, the incessant efforts being made by Mahnama Sathee, a not-for-profit publication since its inception in 1977, deserve appreciation and gratitude for playing a significant role in the promotion of reading habits among the younger generation.
Replete with quality entertainment, character-building short stories and interesting novelettes, the state-of-the-art technological initiative of Mahnama Sathee offers the magazine in an attractive, unique and absorbing multicolor format, which makes learning by reading enjoyable and appeals equally to the young and young at heart.
The magazine’s wide array of educative, informative and stimulating features, such as valuable literacy tools, poems, snippets, quizzes, word play puzzles, posers, brainteasers curious facts, jokes, humorous illustrations and crosswords.
Started its journey four decades before, Mahnama Sathee happens to be one of the leading literary initiatives taken in the subcontinent for the promotion of children’s literature and family reading. The launch of the magazine’s smartphone app proves the fact the journey of children’s literature in Pakistan has come a long way.