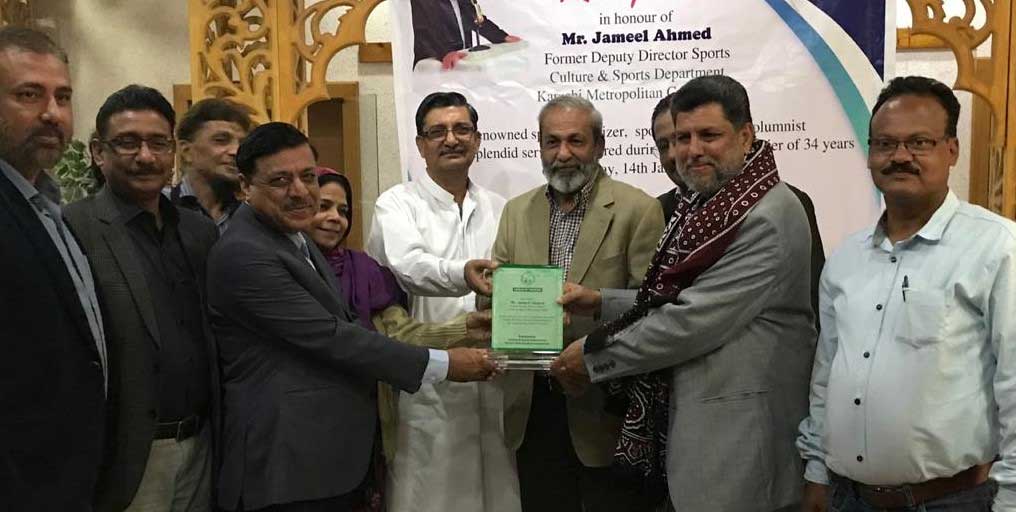 KARACHI: A farewell reception given to Jamil Ahmed Ex-Deputy Director Sports for his tremendous 34 years services 1986-202O. Event arranged by Khursheed A. Shah the Senior Director Culture & Sports Department KMC today at Faizi Rahimeen Art Gallery Aiwan-e-Riffat Karachi, says a Press release.
The event was organized on the occasion by current and former officers of KMC Muhammad Rehan Khan, former Senior Director Sports and Culture Department, Syed Raza Abbas Rizvi Senior Director Terminal, Saif Abbas Hasni Senior Director, Khurshid Ahmad Shah Senior Director Sports and Culture Department, Imran Ahmed Rajput Director Sports and Culture Department, Naheed Abida Director Women Sports Complex, Kanwar Ayub Director Sports, Kahaf Alwara Additional Director Sports, Afsar Hussain, Manzoor Ahmed Deputy Director Culture, Jamil Ahmed Former Deputy Director Sports, Nadeem Khan Deputy Director Sports Atif Ali Addressing the function attended by Additional Director Culture, Syed Shaiq Ali, Naveed Ahmed, Faisal Zafar, Abdul Matin and others, Khursheed Ahmed Shah said that Jamil Ahmed has played a very important role in promoting culture and sports.
He has also been instrumental in the development of cricket in this city. We have had a great time with him. His 34 years of service cannot be described in words.
Mohammad Rehan Khan said that he and Jamil have had a great time together. We have worked in a very friendly atmosphere.
His services in the promotion of sports especially in the promotion of cricket are not hidden from anyone. I congratulate you that you are leaving after a good service with a transparent career. Abbas Rizvi said that the Department of Sports and Culture is to be congratulated who paid homage to the services of Jameel Ahmed. Today his services are commendable.
Saif Abbas Hussaini said that apart from KMC, Jamil Ahmed has also played a significant role in the promotion of sports in the city. His services in promoting Karachi cricket are unforgettable.
Naheed Abida said that Jamil had great services for the department. He has worked hard and diligently throughout the service.
Imran Ahmed Rajput said that Jameel Ahmed has been a hardworking and responsible officer. It is very difficult to describe in words his services regarding the promotion of sports.
Addressing the function, Jameel Ahmed said that I am in the Sports Department. And culture especially Khursheed Ahmad Shah and Nadeem Khan who arranged this farewell ceremony for me. I joined this organization in 1986. During my 34 years of service, I tried to fulfill my responsibilities in the best possible way. For which Khursheed Ahmad Shah and my senior officers have always guided me. Wherever I am leaving today, the late Saif-ur-Rehman Grami has played a very important role in my training and personality development. I will never forget all the officers and personnel I have worked with. I am grateful to all of them that without their cooperation I would probably not have been able to do anything. I realized that I also did a little bit to promote sports in this city.
In the end, Kanwar Ayub, Director Sports thanked all the guests. Nadeem Khan performed the duties of event Director.