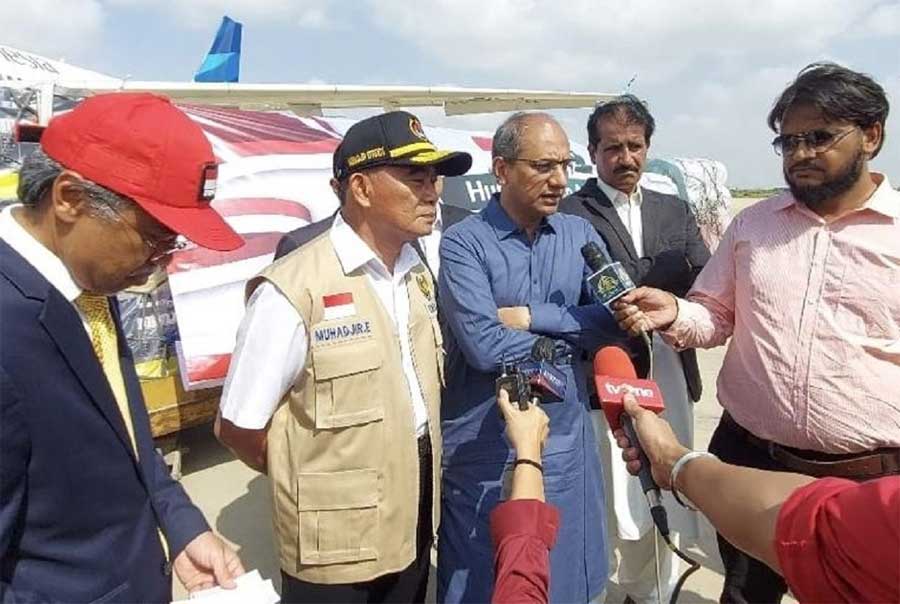 ISLAMABAD: The Indonesian humanitarian relief aid on Tuesday arrived for the victims of devastating flood in Pakistan.

The Coordinating Minister of Indonesia for Human Development and Cultural Affairs Prof. Dr. Muhajir Effendi handed over the flood relief aid from the Government of Indonesia to Minister for Labour of Sindh, Saeed Ghani and Minister for Social Welfare Muhammad Sajid in a ceremony held at Jinnah International Airport Karachi, said a press release issued here.

The humanitarian aid package weighing around 90 tons has been sent by two chartered national Garuda aircrafts carrying logistics such as medicines, tents, clothes, blankets, sleeping bags, mosquito nets, and generators for the victims of devastating flood victims in Pakistan.

Speaking on the occasion, the Head of Delegation Prof. Dr. Muhajir Effendi conveyed deepest condolences and sympathies to the flood victims in Pakistan from the government and people of Indonesia.
He said that both the countries enjoy special historic and brotherly bilateral relations and this humanitarian aid reflects the spirit of friendship and mutual cooperation to support each other in difficult times.
Noting the scale of destruction because of the floods, he said that Indonesia will also help the Pakistani Government in the next phase.

The Minister of Labour of Province Sindh,Saeed Ghani expressed his gratitude to the people of Indonesia for showing solidarity and extending humanitarian relief assistance to Pakistani people.

The Head of National Disaster Management Agency of Indonesia Lt. Gen. Suharyanto, Chairman of Commission VIII of House of Representatives Ashabul Kahfi, and Director
of South and Central Asia Affairs of the Ministry of Foreign Affairs were also present on the occasion representing the delegation from Indonesia.

The two countries have always supported each other at the time of natural calamities whether its tsunami in Indonesia or massive floods of 2010 in Pakistan.
It is hoped that Indonesian assistance will reduce the sufferings of flood affected communities and support the ongoing efforts of the Pakistan government to quickly overcome the impact of large scale damage across the country. – APP