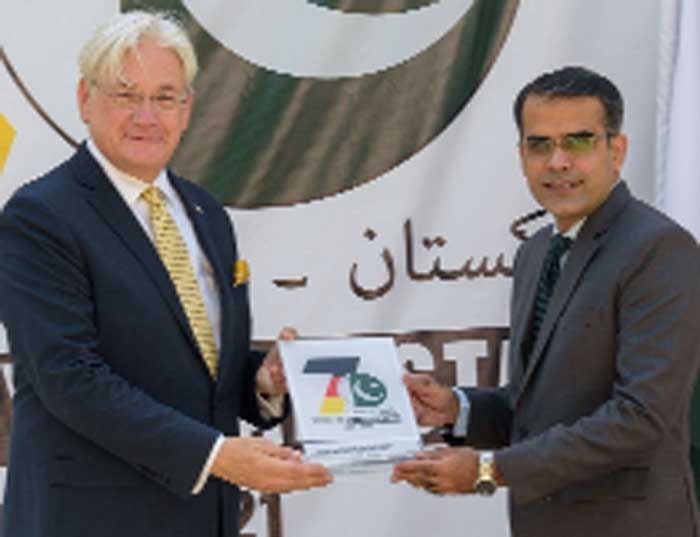 KARACHI: On October 15, 1951, two recently formed countries concluded a brief correspondence on typing paper: Pakistan and (then West-) Germany mutually agreed to set up diplomatic missions on each other’s territories. On October 15, 2021, we celebrate the 70th anniversary of this starting point. Across seven decades, both countries have developed the full spectrum in bilateral relations, says a Press release.
In addition to the main event in Islamabad by the Pakistani Ministry of Foreign Affairs with the German Embassy, the German Consulate General and the MoFA Camp Office in Karachi held a small ceremony “where it all began”, since Karachi was the capital until 1958, when it was shifted first to Rawalpindi, then Islamabad.
In order to mark this auspicious day, Saqib Rauf, Deputy Chief of Protocol, Camp Office Karachi received the Consul General, Holger Ziegeler, accompanied by Ms. Birgit Kuhlmann, Deputy Head of Mission, and Ms. Maren Dick, Head of Consular Affairs.
In front of the logo for the platinum jubilee, both the German Consul General and the DC Protocol highlighted the importance and large bandwidth of bilateral relations. They emphasizedthe fact that Germany has maintained a local diplomatic presence over all this time, serving the provinces of Sindh and Balochistan in economic relations, cooperation in culture and development, and consular services.
They expressed the firm hope the both sides will continue the friendship into the future and encouraged the young generation to participate more actively in the friendly exchanges between the two countries. Plaques were exchanged between the two representatives as token of remembrance of the occasion.
Earlier this year, to mark this important milestone, Pakistani Foreign Minister Shah Mehmood Qureshi visited his German counterpart Heiko Maas in Berlin in April 2021, who soon afterwards reciprocated the gesture in Islamabad. The fine art of naval diplomacy came into play where PNS Zulfiqar visited the port of Hamburg in August, and just recently in September, the German Frigate Bayern performed a partnership visit to Karachi.