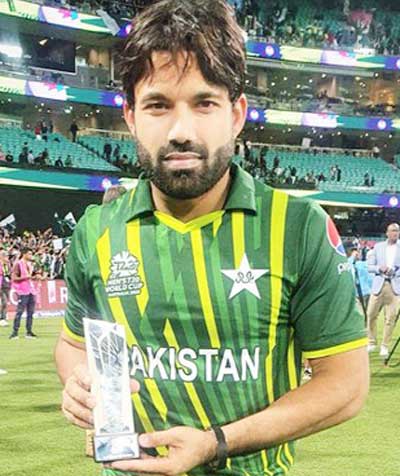 SYDNEY: Babar Azam replied and replied strongly to those who since the start of competition criticized him for not scoring at a faster pace in the power play.

Babar scored 53 in 42 balls smashing seven fours paving the way for 7 wickets victory over New Zealand in the first semi-final played at Sydney on Wednesday.

Babar played with immense confidence and was in full cry and gave a signal that he has regained his form. For the opening wicket Rizwan, 57 off 53 deliveries, and Babar scored 105 runs chasing 153 to win laying foundation for victory. In the power play Pakistan made 55 runs without losing any wicket. Mohammad Haris scored 30 off 26 balls. Pakistan achieved the target in 19.1 overs scoring 153 for the loss of 3 wickets.

Kiwis batting first faced nightmare when Shaheen Shah Afridi removed Finn Allen in the first over. The New Zealand’s batter managed to score only 38 runs for the loss of 2 wickets due to some good howling by Pakistani bowlers. Williamson and Mitchell consolidated the Kiwis innings scoring 68 runs for the fourth wicket.

Williamson and Mitchell were dismissed at score of 46 and 53 respectively. New Zealand managed to score 152 runs for the loss of 4 wickets. Shaheen took 2 wickets for 22 runs.

Poor fielding with 3 dropped catches and 2 missed run out chances led to the defeat of the New Zealand. Rizwan was declared ‘Man of The Match’.