UNITED NATIONS: A Chinese minister has brushed aside Indian concerns over the China Pakistan Economic Corridor (CPEC), saying it is an economic cooperation project, not related to any third party.
“It (CPEC) is not related to their (Indian) sovereignty and territorial integrity,” Dai Dongchang, China’s Minister of Transport, said in response to the objections voiced by an Indian delegate at the virtual briefing on Biodiversity Conservation and Sustainable Transport for Global Development.
The Indian delegate, Sneha Dubey, said they cannot accept the inclusion of CPEC the Belt and Road Initiative’s flagship project, claiming that it passes through India’s territory.
The BRI, a multi-billion-dollar initiative launched by Chinese President Xi Jinping in 2013, is aimed at ushering in a new era of trade and growth for economies in Asia and beyond.
The $60 billion CPEC, which connects Gwadar Port with China’s Xinjiang province, is the flagship project of the BRI.
Ambassador Akram urged all developed countries to follow the footprints of China, to ensure predictable adequate and concessional finances for developing countries to meet climate goals and the biodiversity targets.
Enumerating Pakistan’s contribution to global biodiversity, Ambassador Akram said that its 10 billion trees tsunami is the largest reforestation project in the country’s history
Pakistan has also embarked upon various infrastructure development programmes to enhance regional connectivity, improve the efficiency of transport and trade and logistics.
“Our vision is to provide safe, reliable, affordable, and modern means of communications, which effectively supports the economy, and acts as a catalyst for the socio-economic growth of the country,” he said.
Pakistan, he said, is committed to the UN agenda for Road Safety, which was approved in 2018, saying it would save many lives.
Other speakers, including UN Under Secretary-General, LIU Zhenmin, CBD Executive Secretary, Elizabeth Mrema, and Chinese ministers, including Zhao Yingmin, Minister of Ecology and Environment, and Dai Dongchang, Transport Minister.
Friday’s event was co-hosted by the Permanent Mission of China, UN Department of Economic and Social Affairs, and Conservation of Biological Diversity (CBD) Secretariat. – NNI 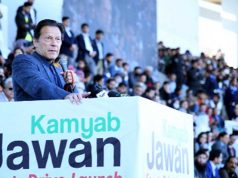