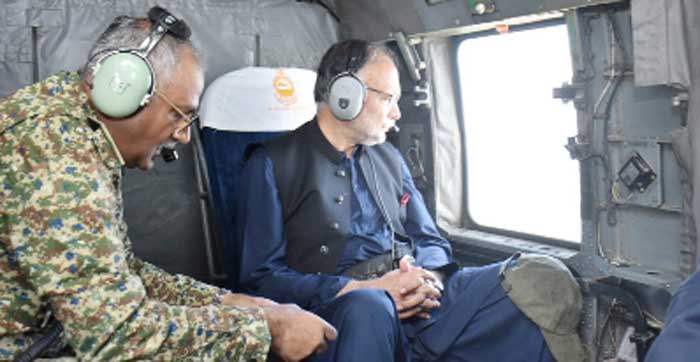 ISLAMABAD: Federal Minister for Planning, Development and Special Initiatives Ahsan Iqbal Sunday said that the foreign aid being received for the flood victims in the country could help stabilize the Pakistani Rupee.
He said although the country had faced more than $30 billion in losses due to the recent floods and torrential rains across the country, but Pakistan’s economy was able to come out of the crisis.
He was talking to media persons during his visit to the flood hit areas of Tehsil Khairpur Nathan Shah, Sindh.
He said at this time, everybody should participate in the relief activities rather than engaging in politics.
The minister also reviewed the relief camp in the area established by the Pakistan Navy. He was briefed on the navy’s rescue mission and relief activities.
Ahsan Iqbal, who also heads National Flood Response Coordination Center, inquired about the difficulties being faced by the local administration, civil society and the people residing in the camp.
He said the climate change issues had brought disaster in the country but the spirit of Pakistani nation was indomitable to overcome this disaster with unity and solidarity.
He said even a developed country could not cope with such a huge destruction, but the people of Pakistan, the federal and provincial governments, civil society and the friendly countries were all working together to get out of this calamity.
Ahsan said humanity was reeling from this calamity as the problems of the people affected by the floods were huge.
“It is duty of every Pakistani who is spared from the ravages of floods to contribute to the rehabilitation of the victims”, he said adding that children and women among the most vulnerable due to food shortage.
The National Disaster Management Authority (NDMA), he said, was dispatching emergency support, and praised the services of civil administration, armed forces and members of civil society for working day and night in the ongoing relief activities. – AP