General Asim Munir has been appointed as the next Chief of Army Staff, with Sahir S. Mirza as the CJCSC. 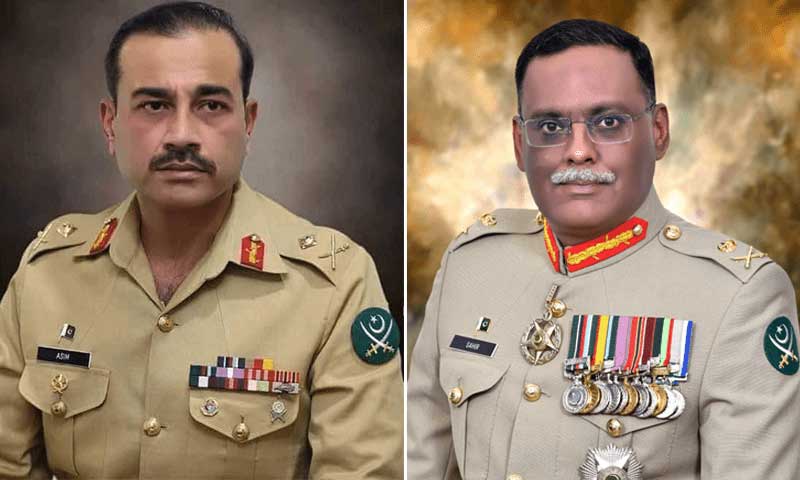 “President Dr Arif Alvi has promoted Lieutenant General Sahir Shamshad Mirza HI(M) to the rank of General with immediate effect and appointed him as Chairman Joint Chiefs of Staff Committee with effect from 27th November 2022,” an official statement issued by the President’s Secretariat said.

“The president promoted Lieutenant General Syed Asim Munir HI(M) to the rank of General with immediate effect and appointed him as Chief of Army Staff with effect from 29th November 2022,” it also stated.

The statement said that the promotions and appointments were made under article 243(4) (a)&(b) and Article 48(1) of the Constitution of the Islamic Republic of Pakistan read with Sections 8-A and 8-D of the Pakistan Army Act 1952.

The development came following the president’s meeting with Pakistan Tehreek-e-Insaf (PTI) Chairman Imran Khan at Zaman Park.
Footage of the president’s caravan arriving at Imran’s Lahore residence was shared on social media by the PTI amid claims that the two would discuss the party’s plan of action ahead of the appointment for the army’s top seat.

President Alvi also held a meeting with legal experts at the presidency and signed the summary following the meeting with Imran Khan.
The Ministry of Defence would formally issue a notification about the top military appointments.
The new army chief and CJCSC also met President Alvi soon.

Lt Gen Syed Asim Munir has diversified experience in the army. He has served as Corps Commander Gujranwala. He was also the DG ISI from October 2018 to June 2019. His short stint as head of the premier intelligence agency raised many eyebrows.

It was said at the time that then-prime minister Imran Khan was not happy with him since he was believed to have brought the alleged corruption of his wife to his notice. Imran was also thought to have been irked by Gen Asim’s resolve to go by the book.

General Asim Munir also served as DG Military Intelligence. He is considered as a frontrunner as the government has indicated that the principle of seniority would take precedence this time in the appointment of a new chie

Lt Gen Sahir Shamshad Mirza is the second on the seniority list. He is Corps Commander Rawalpindi. He also served as Chief of General Staff (CGS), a key position most army chiefs held in the past.

CGS is known as the de facto army chief since he heads both the operational and intelligence directorates in the army. In simple words, every file in the army goes through his table.

Previously he served as Director General Military Operations. General Sahir has an interesting personal background. He lost his parents at an early age. He rose to this position with sheer hard work and struggle.

It is said that he mentioned his unit in the parents’ column. Those who know Gen Sahir closely say he enjoys a good reputation in the army. He is not involved in any controversy and there is not much debate about his candidature.
Under the Constitution, the president may stretch the appointment of the new army chief for 25 days. The government had several plans in case the president delayed the summary.

It has the authority to appoint the vice chief of army staff (VCOAS) as there is no requirement for the president’s approval for this purpose.

The government may also promote a lieutenant general to a full-fledged general for extending the tenure of the officer whose retirement is due.

A government official expressed his surprise that an “unnecessary” discussion was underway over the possibility of delaying the army chief’s appointment summary. “I think this is not an issue at all,” he added.

A PTI leader said he did not think that President Alvi would delay the summary.
PTI chief Imran Khan said on Wednesday that President Arif Alvi was in contact with him and would consult him on the appointment of a new army chief as he was the party chief.

He asserted that if the prime minister can liaise with an “absconder” – a reference to PML-N supremo Nawaz Sharif – then the president can consult with me as I am the party chief.

“The president will absolutely discuss the matter with me,” he further said and added that he was not aware of who they will appoint but “the president and I have decided that we will play with this within the law and do whatever is in law and Constitution,” Imran said in an interview on a private news channel.