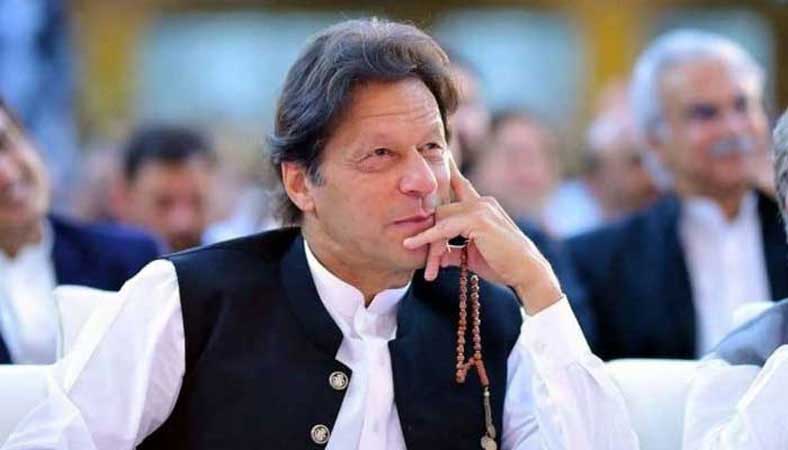 ISLAMABAD: On Monday, the Islamabad High Court (IHC) overturned a notice from the Pakistan Electronic Media Regulatory Authority (PEMRA) that said Imran Khan’s speeches couldn’t be shown live on TV.
When IHC Chief Justice Athar Minallah heard the ex-prime minister and Pakistan Tehreek-e-Insaf (PTI) leader’s appeal against the ban, he said that, at first glance, it looks like PEMRA went beyond its authority. The IHC told the PEMRA and the attorney general of Pakistan what was going on.
Justice Minallah also said, “Right now, there is no good reason to stop Imran Khan from speaking. The PEMRA doesn’t have the power to make such an order.
The court also told PEMRA to choose an officer to come to court and explain why the notice was sent out. The notice was put on hold until the next hearing on September 5.
Ali Zafar, a lawyer for the PTI, said during today’s hearing, “Imran Khan is raising money for flood victims today, especially from Pakistanis living abroad. But he has been told he can’t give a live speech. The notice from PEMRA says that Imran Khan’s speech is against the national interest.”
The court then told PEMRA to read the notice, which said that Imran had threatened the Inspector General, the Deputy Inspector General, and Additional District and Sessions Judge Zeba Chaudhry. After the notice was read, the judge asked, “Can you explain what Imran Khan said?” The court protects freedom of speech, but there are some things that don’t count.
Justice Minallah questioned the PTI’s claims that PTI leader Shahbaz Gill had been tortured. He asked, “How many cases of torture that came up in the last three years, when the PTI was in power, were sent to the cabinet?” You don’t think that torture has been going on for the past three years, do you? A journalist from Lahore was taken and severely tortured. Can the lower courts be threatened in this way?
“For the past three years, this court’s goal has been to make all courts better. But I say with a heavy heart that I never thought this would happen. “Everyone would have been arrested under PECA (Prevention of Electronic Crimes Act) if it hadn’t been thrown out,” Justice Minallah said.
The IHC CJ said, “The current government, which has been affected over the past three years, is doing the same thing.”
Justice Minallah said this about Imran’s “warning” to Sessions Court Judge Zeba Chaudhry: “Given the way things are now in our society, it is hard for a woman to work.” He asked the PTI’s lawyer if he could explain why a leader of this stature would say what he did.
“A leader has a big job to do because he has a lot of people following him. “We’ve always been careful, but there should be a red line somewhere,” said the IHC Chief Justice.
“Torture is a different matter. “You made this argument pointless,” Justice Minallah told the PTI’s lawyer. “Baloch students were brought before this court. Wasn’t that torture? Doesn’t police torture people every day?” he asked.
Justice Minallah was shocked and upset by the way a judge was talked about. “The person whose case is still going on has lost the most,” said the chief justice.
In response to the IHC CJ, the PTI lawyer said, “We agree with you completely that this shouldn’t have happened.”
“Which executive has dealt with the issue of torture?” asked the chief justice IHC. In the last three years, this court has told the police to carry out orders, but you ruined the whole debate, said Justice Minallah, who also said that a petition about torture should have been brought to court. “There was a process in place to handle the claims of torture,” he said.
The petition was sent to the court this morning by the lawyers for the party leader. They asked the court to overturn the ban order.
“Imran had asked for legal action to be taken against those responsible for the violence against party member Shahbaz Gill,” the petition said.
It went on to say that as a citizen, everyone has the right to go to court, and that the PTI chief’s speech was misinterpreted as hate speech.
The petition also said that Imran’s call for legal action to be taken against those who “tortured” Gill is not hate speech.
Earlier, the PEMRA had told all satellite TV channels that they couldn’t show live speeches by the head of the PTI.
During a protest rally in Islamabad, Imran warned the IG and DIG of the Islamabad police. This led to the decision by the governing body.
During the rally, he told the crowd that he would not let them off easy and would file a case against them for “torturing” party leader Shahbaz Gill while he was in physical remand.
He also criticised Additional District and Sessions Judge (ADSJ) Zeba Chaudhry for agreeing to the police’s request for physical remand even though she knew Gill was “tortured.” “We won’t leave you [Zeba], and we’ll also file a case against her.”