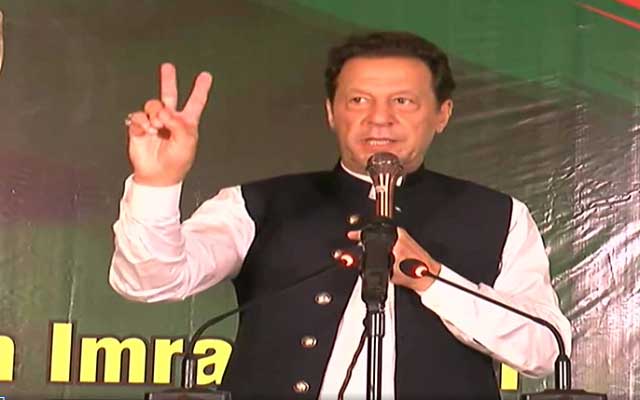 ISLAMABAD: Former prime minister and PTI Chairman Imran Khan has asked minority communities to join his movement for “real freedom”, saying society can never proposer without rule of law and justice.
“The aim of Tehreek-e-Insaaf (PTI) is to provide justice to the people and our war is against elite capture and a small group of people who have been imposed upon the country and have a monopoly on resources,” he said while addressing the minority convention in Islamabad on Thursday.
National Day of Minorities is being observed today (Thursday) to honour the services rendered by minorities for the creation of Pakistan and their subsequent contribution to nation-building.
The government declared August 11 as National Minority Day in 2009.
The PTI chief said he considered minorities equal citizens of Pakistan and assured them that his party would protect their rights.
Imran also condemned the practice of forced conversion of minorities on the pretext of marriage, saying there is no compulsion on non-believers to accept Islam.
Calling justice and rule of law two main components to achieve ‘real freedom,’ the former premier said human rights and humanity are the bedrock of society.
“A society can never prosper without the rule of law…everyone including rich and poor must have equal human rights,” he added.
Speaking about his upcoming rally in Lahore, the former premier told the gathering that on August 13 his party will celebrate ‘real freedom’ and give a message to minorities that they are equal citizens of Pakistan.
He also added that he will also unveil a future course of action on how to achieve ‘real freedom’.
Meanwhile, former prime minister and Pakistan Tehreek-e-Insaf chief Imran Khan on Thursday strongly condemned the arrest of the director news of a private TV channel and the wife of Shahbaz Gill’s assistant.
Terming the arrests ‘fascist illegal abductions’, the PTI chairman asked the legal community if there were no “fundamental rights anymore”
Following the arrest of Shahbaz Gill on Saturday, the ICT police also raided his assistant’s home and maintained that the arrest was ‘legal’.
Taking to his official Twitter handle, Imran maintained that the “imported government of cabal of crooks” is using fear and terror against the media and the people to “gain acceptance after being routed in Punjab”.
He added that such actions are “further destabilising [the] country” and the only solution for the issues facing Pakistan are “fair and free elections”.
Gill was arrested for sedition and inciting the public against state institutions, the government had confirmed on earlier this week.
“An attempt was made to incite mutiny and sedition in the Pakistan Army ranks and files. This whole conspiracy is being investigated and the conspiratorial characters are being determined,” said Interior Minister Rana Sanaullah