ISLAMABAD: Federal Board of Revenue’s Inland Revenue Enforcement Network (IREN) conducted various operations against illicit, counterfeit and non-duty paid cigarettes. IREN’s Directorate of I & I-IR Faisalabad Unit conducted a raid at Samanabad and discovered 201 cartons (2,000,000 cigarettes) of non-duty paid cigarettes.
The confiscated cigarettes of various local brands such as Gold Mark, Cricket, Grace etc. have been moved to the warehouse of the Directorate.
Similarly, the IREN Unit of Directorate of I& I-IR Karachi, intercepted the vehicle and found 119 Cartons (990920 sticks) of non-duty paid cigarettes. The same have been detained on account of non-production of valid documents. The value of federal excise duty and sales tax of confiscated cigarettes is around 6 million. Further investigation is under way.
A team of Directorate of I&I (IR), Hyderabad visited Godown of a Transport Company at Tando Mohammad Khan and found 121 Cartons (1210000 sticks) of different brands of cigarettes stocked in the godown.
The person present there failed to produce any documentary evidence regarding payment of applicable duties and taxes in respect of these Cartons. Hence the stock of 121 cartons involving duty and taxes of Rs. 2.634 million has been detained for further investigation. 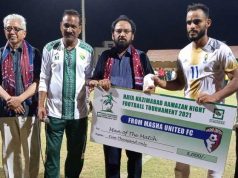 LCCI chief terms FIEDMC to be a game changer