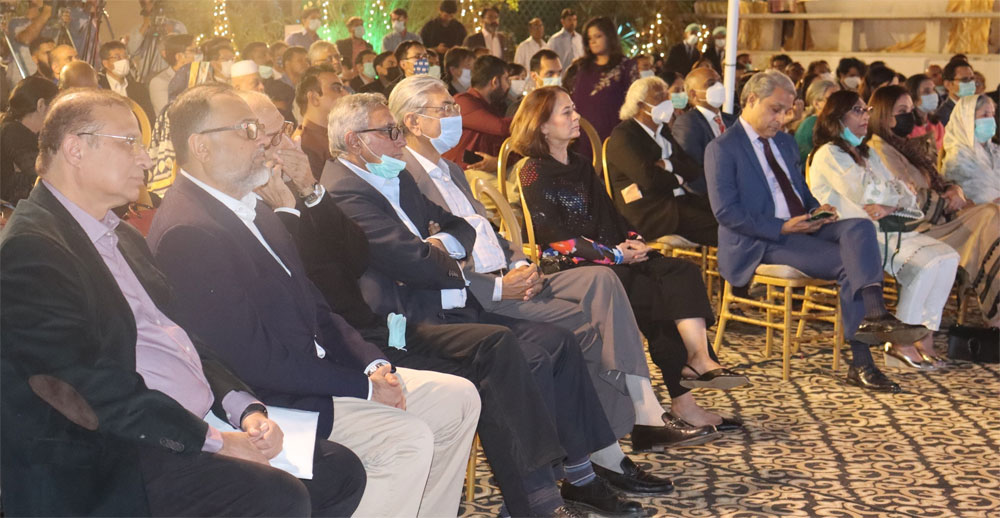 KARACHI: The Consulate-General of Japan in Karachi organized “Japan Fest 2021” at Official Residence of Consul-General, Thursday, says a Press release.
The program of Japan Fest 2021 was opened in traditional Japanese style with a wadaiko (Japanese drums) performance led by Deputy Consul-General ASHIDA Katsunori, followed with speech by Consul-General of Japan in Karachi, Isomura Toshikazu, in which he expressed his pleasure on the recommencement of cultural events after the pandemic-imposed break. He appreciated the cultural interactions between Japan and Pakistan, particularly noticing that next year both countries will be celebrating 70 years of the establishment of diplomatic relations.
The speech was followed by video messages from dignitaries including Haider Ali, Gold medalist in Tokyo Paralympics 2020, Anwar Maqsood and Imran Ismail, Governor Sindh, wherein they applauded the organization of such events and shared anecdotes of their stay and bonds with Japan. A quiz competition of interesting facts about Japan was held and the winners were awarded prizes by the Consul-General.
The next act was a presentation by Pakistan Japan Literature Forum (PJLF), narrating the journey of Urdu translation of Genji Monogatari, world’s first novel, written in early 11th century. The next program was a live demonstration of Truck-art, in collaboration with Sadequain Foundation who draw the scenery of Mount Fuji in autumn.
The main event of the evening was an enthralling performance by a Japanese armature band MoonStone, comprised of saxophone, bass, piano and drums who performed for the event from Japan. The audience was also delightedly treated by enchanting tunes played by sitar maestro Ustad Nafees Ahmed who was joined by Ashida Katsunori on vocals and keyboard. The onlookers were captivated by the fascinating diversity of traditional Japanese music and the unique fusion of Japanese and Pakistani compositions, which culminated with a heartfelt rendition of “Dil dil Pakistan”.
As the event came to a close, guests were treated to sushi accompanied by a delicious buffet befitting of the setting. The excitement of the guests and the mixing of cultures were testament enough that Japan Fest 2021 went down as a night to remember.