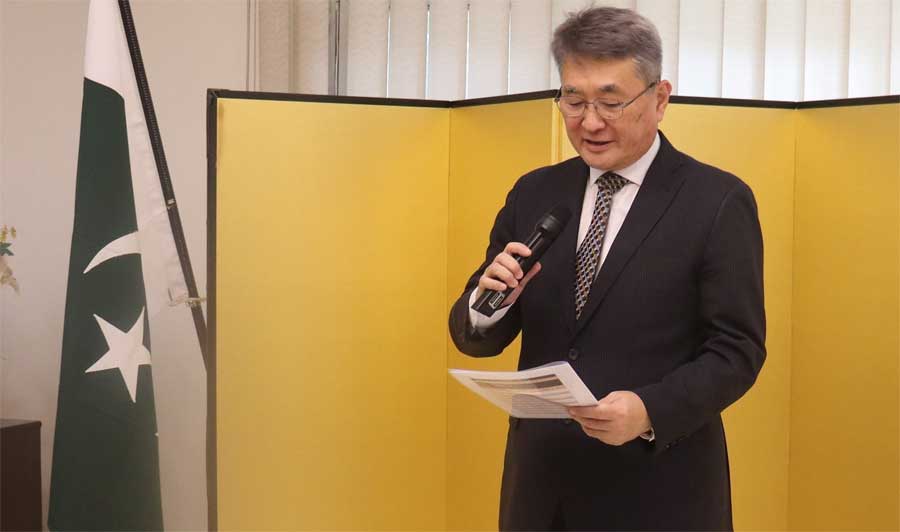 KARACHI: Ministry of Foreign Affairs of Japan has conferred the Foreign Minister’s Commendation for FY2021 upon Muhammad Ilyas, Language Director and Chief Instructor, Japanese language course of Pakistan-Japan Cultural Association (PJCA), in recognition of his significant contribution in the promotion of Japanese language education in Pakistan, says a Press release.
On behalf of the Foreign Minister of Japan, Isomura Toshikazu, Consul-General of Japan in Karachi, presented the commendation to Muhammad Ilyas on November 11, 2021. Based in Karachi, Ilyas has been teaching Japanese language to Pakistani students from basic to advance levels since 1998 and has been an active member of PJCA.
Every year, the Foreign Minister’s Commendations are awarded to individuals and groups with outstanding achievements in various fields to acknowledge their contributions to the promotion of friendship between Japan and other countries and areas. The Commendations also aim to develop understanding and support of the Japanese public for the activities of the recipients. This year, the Commendations will be awarded to 177 individuals and 41 groups.
The Consul-General presented the commendation to Ilyas and congratulated him upon receiving this prestigious award. He remarked that people-to-people exchange is one of the most important pillars; sustaining the friendly relationship between Japan and Pakistan and vowed to work progressively for further strengthening of bilateral ties.
Concluding the event, Muhammad Ilyas thanked Japanese Foreign Ministry for selecting him for 2021 commendations and desired to further encourage Japanese language education in Pakistan.