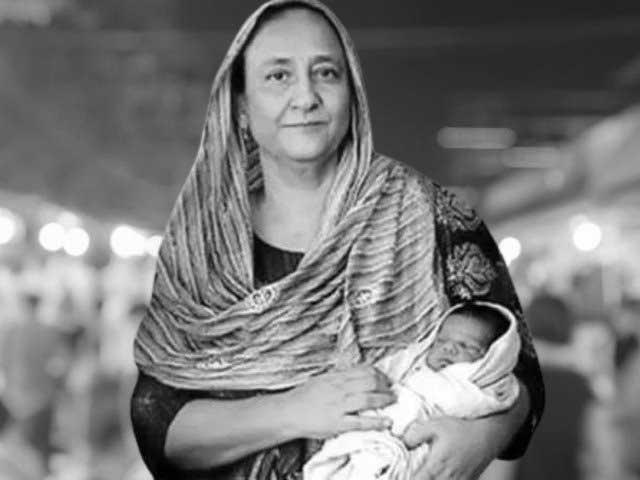 ISLAMABAD: Bilquis Bano Edhi, the widow of renowned humanitarian and philanthropist Abdul Sattar Edhi who had passed away at the age of 74 on Friday, was laid to rest amid tears and sobs in Karachi’s Mewa Shah Cemetery on Saturday.
Bilquis had been undergoing treatment at a private hospital for a few days due to a heart condition. However, she could not recover.
After the funeral prayers, she was buried in Mewa Shah Cemetery. Her funeral prayer was offered at New Memon Mosque Bolton Market after Zuhr prayers and attended by a large number of people belonging to all walks of life.
Sindh Chief Minister Murad Ali Shah, Sindh Minister for Information and Labour Saeed Ghani, Special Assistant to Sindh Chief Minister Waqar Mehdi and other ministers and members of the provincial assembly and personalities from various walks of life were also present on the occasion.
The country’s military leadership also laid a wreath at the grave of the deceased while the Sindh Police contingent saluted the body of Balquis Edhi and her burial was completed at the official level. Strict security arrangements were made on this occasion.
Meanwhile, PPP Chairman Bilawal Bhutto Zardari moved a joint resolution in the National Assembly over the passing of Bilquis Edhi which was passed unanimously.
“The House expresses grief over the passing of Begum Bilquis Bano Edhi whose incomparable services and selfless devotion to the downtrodden and disenfranchised people of Pakistan have served and continue to serve as an inspiration for the world,” it stated.
The resolution recommended to the government to award Bilqui Edhi with highest civil award for the unparalleled services to the country and its people.

TRG violation of PSX rules and regulations blamed for lack of...