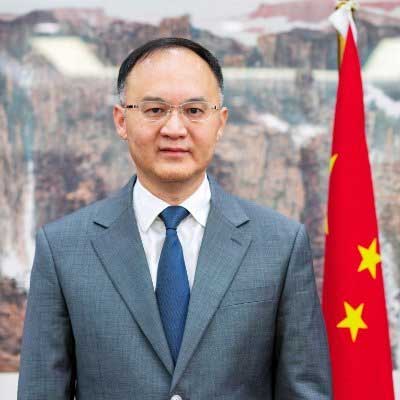 ISLAMABAD: Chinese Ambassador Nong Rong Sunday called on Interior Minister Sheikh Rasheed and demanded security protocols for his nationals and the companies more tightened.
The Chinese Ambassador accompanied by a delegation visited Sheikh Rasheed Ahmad’s residence at Lal Haveli in Rawalpindi and discussed bilateral issues.
In the meeting, Sheikh Rasheed ensured the ambassador that they would further improve the security of Chinese citizens and Chinese companies operating in Pakistan.
The Interior Minister further stated that they were formulating a joint strategy to protect Chinese citizens and the companies working in the country.
He said mutual cooperation and development of Pakistan and China would not be allowed to be held hostage by terrorists.
Both the dignitaries discussed the overall situation in the region especially the issues related to Afghanistan.
In view of the changing situation in Afghanistan, the interior minister said that the region had become even more important.
Sheikh said lasting peace in Afghanistan was important for the development of the region and the security of the world.
The interior minister said Pakistan would continue to play its role for peace and stability in Afghanistan in future. He said his ministry was providing full support to those leaving Afghanistan. – NNI