QUETTA: Prime Minister Imran Khan has reiterated the determination of his government to develop the western route of the China-Pakistan Economic Corridor (CPEC) to connect areas, which were neglected in the past.
The prime minister said this while addressing the ground-breaking ceremony of various projects in the provincial capital on Wednesday.
Imran Khan said that Balochistan was neglected in the past but the Pakistan Tehreek-e-Insaf (PTI) government is fully focusing to bring this province at par with other developed parts of the country. The prime minister, on the occasion, also directed National Highway Authority (NHA) to ensure top quality of roads being constructed in Balochistan.
He said that 11,000 kilometres long roads were constructed in 15 years, whereas infrastructure projects with a total length of 3,300 kilometres were completed in just two-and-a-half years of the PTI government. The prime minister pledged to develop the entire area along the western route of the China-Pakistan Economic Corridor (CPEC).
The prime minister assured that the government would do everything to redress the grievances of the people of Balochistan and said his focus is to bring a revolution in the province. He said the government is focusing on projects of infrastructure and human development.
“Caring for humanity is the main driving force that places the nation at high pedestal of morality,” he remarked. The PM deemed the elite responsible for the prevailing economic divide in the society, emphasising the need for model development for all.
During the day-long visit, the prime minister inaugurated the construction of 162-kilometre Ziarat Harnai Road, 23-kilometer dualisation of Quetta Western Bypass (N-25) and construction of 11-kilometer Dera Murad Jamali Bypass (N-65).
Speaking on the occasion, Minister for Communication Murad Saeed said that road projects in Balochistan will enhance connectivity and bring prosperity in the province.
He said that these projects will also provide access to markets for farmers and traders. He said the government will lay the foundation stone of 796-km long Chaman-Quetta-Karachi highway till December this year.
Speaking on the occasion, Balochistan Chief Minister Jam Kamal Khan said that practical steps initiated by the incumbent government will improve the living standard of the people besides providing job opportunities.
Separately, addressing a ceremony to distribute cheques among the youth under Kamyab Jawan programme, the prime minister said the coastal areas of Balochistan offer immense potential in fisheries and the local youth should learn techniques to fully tap the opportunities.
The prime minister said the government will support the youth through proper training in fisheries and help them run own businesses. He expressed satisfaction over allocation of Rs10 billion for the small business and skill development of the people of Balochistan.
Imran Khan proposed that learning of cage fishing technique as an aquaculture fish production system could prove beneficial for poor fishermen. He said that promotion of the fisheries sector would help uplift the youth of Balochistan and would ultimately benefit Pakistan.
Meanwhile, Prime Minister Imran Khan has underscored the importance of equitable, timely and scaled delivery of Covid-19 vaccines to low-income countries.
In a telephonic conversation with co-chair of the Bill and Melinda Gates Foundation Bill Gates, the prime minister commended the Gates Foundation’s strong advocacy to promote equitable access to Covid-19 vaccines.
The prime minister and Bill Gates exchanged views on the latest status of Covid-19 pandemic, polio eradication campaign, health and development issues, and climate change. They agreed on the importance of urgently stopping the spread of Covid-19, polio and other vaccine-preventable diseases in Pakistan.
The prime minister reaffirmed that eradication of polio remained a key priority of the government and efforts were underway to intensify the anti-polio campaign across the country despite Covid-19 related challenges. He affirmed his commitment to strengthening efforts nationwide to achieve a polio-free Pakistan.
The prime minister expressed appreciation for the work of Bill and Melinda Gates Foundation for fighting poverty, combating Covid-19 pandemic and inequalities around the world.
Recalling his recent letter addressed to Bill Gates on climate change, Imran Khan apprised Bill Gates about Pakistan’s flagship initiatives, including the 10 Billion Tree Tsunami Initiative.
Bill Gates acknowledged Pakistan’s commitment to address climate change and agreed that the world must come together to face this global challenge.
While highlighting that food systems are particularly vulnerable to climate change, he emphasised that the global leaders should prioritise investments in agricultural research for adaptation. He also suggested Prime Minister Imran Khan to leverage Pakistan’s unique voice to raise awareness for increasing global support for smallholder farmers.
Pakistan’s robust partnership with the Gates Foundation was also acknowledged including the foundation’s continued support to the Ehsaas Programme, which helps the most vulnerable segment of Pakistan’s population. The premier and Bill Gates agreed to continue working together on shared objectives. – TLTP 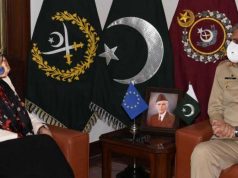 Treason case against Nawaz Sharif likely to be filed soon

Dollar slips to Rs149.90 in interbank