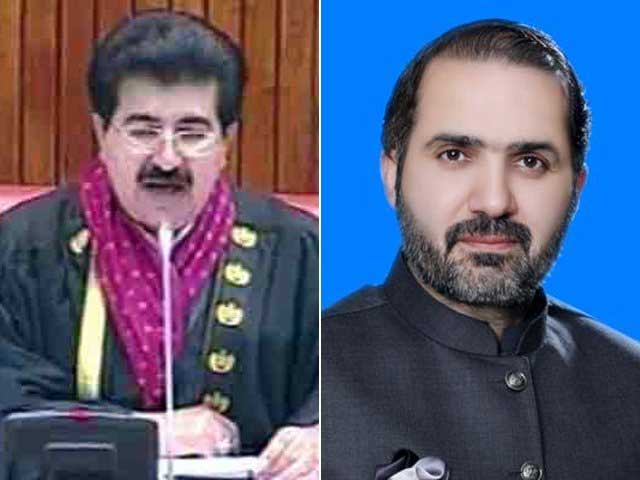 ISLAMABAD: Sadiq Sanjrani and Mirza Muhammad Afridi of the ruling coalition were elected as chairman and deputy chairman of the Senate, respectively, on Friday in a big blow to the joint opposition alliance Pakistan Democratic Movement (PDM) which has a majority in the Upper House.
Out of the total 98 votes polled, Sadiq Sanjrani secured forty-eight votes whilst his rival Yousaf Raza Gilani got 42 votes. Eight votes were rejected. Mirza Muhammad Afridi, for the office of Deputy Chairman Senate secured 54 votes whilst the candidate of opposition parties Abdul Ghafoor Haideri bagged 44 votes out of the total ninety-eight votes polled.
After being declared the winner, Sanjrani took the oath of office and later presided over the election for the Senate deputy chairman. Later, Mirza Muhammad Afridi took oath as deputy chairman of the Senate for three-year term.
In his remarks after taking the oath, Chairman Senate Sadiq Sanjrani thanked the senators who reposed confidence in him and voted in his favour. He also thanked the entire leadership of PTI including Prime Minister Imran Khan for their support. He said that he will continue to take all the Senators along.
The opposition challenged the result of the Senate chairman election after it was announced that seven votes cast in favour of opposition candidate Yousuf Raza Gilani were rejected.
However, presiding officer Syed Muzaffar Hussain Shah overruled their objection, saying the seven votes were rejected because they were not stamped correctly. Another vote was rejected because it had been cast in favour of both the candidates.
Polling began after 3:00pm, and an officer called out names of senators in alphabetical order who collected ballot papers from officials and cast their votes at the polling booth.
Former prime minister Gilani (PPP) and Haideri (JUI-F) were fielded by the PDM as its joint candidates for the posts of chairman and deputy chairman, respectively. The government had already announced that Sanjrani will be its candidate for the office for another term. On Thursday, Prime Minister Imran Khan nominated Senator Afridi – a billionaire from erstwhile Fata – for the post of deputy chairman. – TLTP