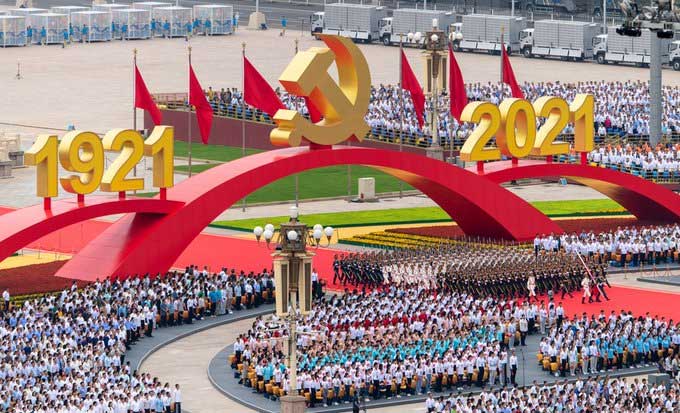 Marxism is the fundamental guiding ideology upon which our Party and our country are founded and thrive. Marxist theory is not a dogma, but a guide to action; it must develop with the evolution of practice, and only by adapting to the Chinese context can it take root in our country and gain a firm place in Chinese people’s hearts.
The fundamental reason why the Party has been able to lead the people through painstaking searches, setbacks, and pioneering efforts to accomplish enormous tasks that were inconceivable for any other political force in China is its commitment to the following: freeing minds, seeking truth from facts, advancing with the times, and applying a realistic and pragmatic approach; adapting the basic tenets of Marxism to China’s specific realities and China’s fine traditional culture; abiding by the principle that practice is the sole criterion for testing truth; and grounding all its efforts in reality. Furthermore, the Party has provided prompt answers to the questions of our times and our people, and kept adapting Marxism to the Chinese context and the needs of our times.
As Comrade Xi Jinping pointed out, the great social transformations that contemporary China has undergone are not a natural continuation of our country’s historical and cultural traditions, not a mechanical application of the templates designed by authors of Marxist classics, nor a copy of the socialist practice in other countries or foreign models of modernization. As long as we have the courage to keep making theoretical innovations in light of new practical developments and use new theory to guide new practice, we are certain to see Marxism emanate mightier and more compelling power of truth across the land of China.

Independence is the essence of China’s national spirit, and it is a major principle for building our Party and our country. We must follow our own path-this is the historical conclusion our Party has drawn from its endeavors over the past century.
The Party has always followed an independent path as it has pressed forward, stressing reliance on our own efforts to drive the nation’s development, and maintaining that China’s affairs must be decided and run by the Chinese people themselves. Throughout human history, no nation or country has ever become strong and prosperous by relying on external forces, indiscriminately copying the models of other countries, or blindly following in others’ footsteps. Those who have attempted to do so have either suffered inevitable defeat or been reduced to vassals of others.
As long as we maintain independence and self-reliance, bolster our people’s sense of national dignity and self-confidence while drawing on the useful experience of other countries, and refuse to be taken in by fallacies or to bend in the face of pressure, we will be able to keep the fate of China’s development and progress firmly in our own hands.
5. Following the Chinese path
The direction determines the path, and the path determines the future. Throughout its endeavors over the past century, the Party has always stayed grounded in China’s conditions and felt out a right path consistent with China’s realities-the path of socialism with Chinese characteristics. It is a sure path toward a better life for the people and the rejuvenation of the Chinese nation. The Chinese land, the Chinese civilization, and the Chinese path provide our Party and people an infinitely vast stage, a heritage of incomparable depth, and unmatched resolve for forging ahead.
We must neither retrace our steps to the rigidity and isolation of the past, nor take a wrong turn by changing our nature and abandoning our system. As long as we follow the path of socialism with Chinese characteristics with unswerving commitment, we will be able to develop China into a great modern socialist country that is prosperous, strong, democratic, culturally advanced, harmonious, and beautiful.

When the path is just, the common good will reign over all under Heaven. The Party has been cogitating on the future of humanity with a global vision, and has correctly understood and handled China’s relations with the rest of the world in the context of the general trend of human development, the grand scheme of things amid global changes, and the entire course of Chinese history. It champions opening up over isolation, pursues mutual benefit instead of zero-sum games, and stands up for fairness and justice. This has enabled the Party to stand on the right side of history and the side of human progress.
We will keep to the path of peaceful development, developing our country by safeguarding world peace and contributing to world peace through our development. We will move forward in tandem with all progressive forces around the world. We will never rely on others, take advantage of others, or seek hegemony. As long as we stick to these principles, we will be able to continue contributing our wisdom and strength to the progress of human civilization and work with the people of other countries to keep the wheels of history rolling toward a brighter future.

Innovation is an inexhaustible source of momentum for the development of a country and a nation. The greater the cause, and the more fraught it is with difficulties and obstacles, the more important it is to work hard and break new ground.
The Party has led the people in surmounting all difficulties, searching high and low for a way forward, and pressing ahead with determination. As we have made constant innovations in theory, practice, institutions, culture, and other areas, we have demonstrated the courage to be pioneers and pursue a path hitherto uncharted. No difficulty or obstacle has been able to hold back the advance of the Party and the people.
We will continue to follow the trend of the times, respond to the demands of the people, and boldly advance reform. We will accurately identify changes, adeptly respond to them, and work to steer them in a favorable direction. We will never become rigid and never cease making progress. As long as we keep doing so, we will be able to bring about more miraculous achievements that amaze the world.

8. Standing up for ourselves

Having the courage to fight and the mettle to win provides the Party and the people with inviolable strength. All the achievements that the Party and the people have made did not come from nothing, nor were they given to us by others; they were earned through persistent struggle.
The Party was born amid domestic turmoil and foreign aggression, was tempered through numerous tribulations, and has grown strong by surmounting difficulties. No matter how powerful the enemy, how difficult the journey, or how grave the challenges, the Party has never lost heart or backed down, and never hesitated to make necessary sacrifices. It has remained unyielding despite all setbacks, fighting for our people, our country, and our nation, as well as our shared ideals and convictions.
We should grasp the contemporary features of the great new struggle, seize historical opportunities, and get a head start. As long as we carry forward the fighting spirit, build up our ability, and rally the will and strength of the whole Party and the entire nation, we are sure to overcome any risks or challenges, whether foreseeable or otherwise.

Solidarity is strength. Developing the broadest possible united front provides important assurance for our Party to defeat the enemy and to govern and rejuvenate the country.
The Party has remained committed to great unity and solidarity, united all forces that can be united, and mobilized all positive factors available in order to promote harmony between different political parties, ethnic groups, religions, social strata, and compatriots at home and abroad. This has allowed us to pool strength to the greatest extent possible for our common goals.
As long as we continue to consolidate solidarity between different ethnic groups, people across the nation, and all the sons and daughters of the Chinese nation, foster a strong sense of community for the Chinese nation, and ensure that Chinese people all over the world focus their energy and ingenuity toward the same goal, we will bring together a mighty force for making national rejuvenation a reality.

Having the courage to reform itself is a hallmark that distinguishes the Communist Party of China from other political parties. The spirit of self-reform underpins the Party’s ability to maintain its youthful vigor.
The advanced nature of a Marxist party is not a given, but rather cultivated through constant self-reform. The Party has emerged from one hundred years of vicissitudes with even greater vitality. The secret to this lies in the Party’s commitment to upholding truth and righting errors. The Party is great not because it never makes mistakes, but because it always owns up to its errors, actively engages in criticism and self-criticism, and has the courage to confront problems and reform itself.
As long as we consistently remove all elements that would harm the Party’s advanced nature and integrity, and eliminate any viruses that would erode its health, we will be able to ensure that the Party preserves its essence, color, and character and see that it always serves as the strong leadership core in the course of upholding and developing socialism with Chinese characteristics in the new era.
These ten points represent valuable practical experience gained over a long period and intellectual treasures created through the joint efforts of the Party and the people. All of us must cherish them, uphold them over the long term, and continue to enrich and develop them in practice in the new era.

VII. The Communist Party of China in the New Era

Govt will not tolerate terrorism in the garb of politics: Sanaullah

Pakistan Customs to ensure strict caution at all airports: FBR