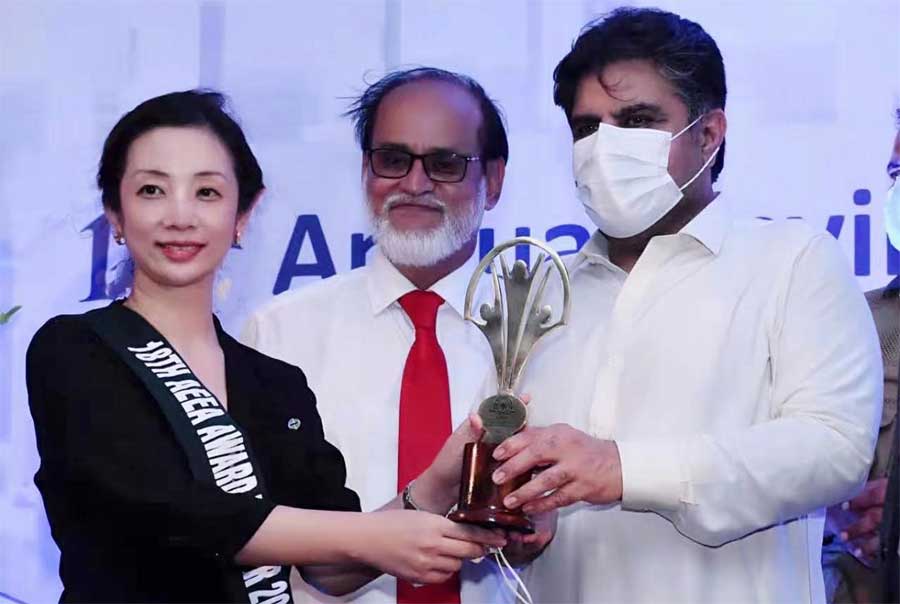 KARACHI: Sino Sindh Resources Private Limited (SSRL), a subsidiary of Shanghai Electric, has been awarded the 18th Environment Excellence Award 2021 from National Forum of Environment and Health (NFEH), here Thursday, says a Press release.
Besides SSRL, 74 other companies were also given these awards for showing distinction in the last year to improve environmental conditions. Seven other entities also received awards for doing tree plantation in the city.
Ms Yang Jin, Head of Admin and HR of SSRL, received the award on behalf of the company from the Provincial Minister for Local Government and Public Health Engineering Syed Nasir Hussain Shah during an awards ceremony on Thursday night.
Li Jigen, CEO of Sino Sindh Resources Private Limited (SSRL), expressed his pleasure at the award and stressed that his company will continue playing its role in protecting the environment.
“Environment and public health are of utmost importance to us and we will continue to play our role in protecting them,” he said.
Coal-electricity integration project in Block 1 of Thar Coalfield, a “China-Pakistan Economic Corridor” priority implementation project, includes construction and operation of open-pit coal mine with an annual output of 7.8 million tons and 2X660MW supercritical lignite power station.
SSRL is the sole operator of the 7.8 Mtpa Open-pit Coal Mine project. The Block 1 open-pit coal field covers an area of 140km2, and the estimated total lignite resource reserve is about 3.8 billion tons, which is No. 1 in Asia and No. 7 in the world and also the largest open-pit coal mine under construction in Pakistan.
Meanwhile, speaking as the chief guest Sindh Local Government Minister, Syed Nasir Hussain Shah who in the recent past also held the portfolio of the Sindh Forest Department said that Pakistan’s position on the world ranking of countries having most mangrove trees in their coastal zones will further improve in the coming months owing to the aggressive plantation campaign by the Sindh government’s Forest Department.
“Pakistan at present stands at the seventh position on the world ranking of mangrove forests as in the next two to three months our standing will further improve to the fourth or fifth position,” he said.
He said the Sindh Forest Department’s aggressive campaign to grow mangrove forests on the coastline of the province was like a revolution as earlier it had even clinched the world record by planting the greatest number of mangrove plants in a single day.
He said that an urban forestry campaign was also being conducted in Karachi in the areas of Lyari Expressway, Clifton and Shah Faisal Colony.
Shah said the provincial Local Government Department had been undertaking a number of projects related to sewage and industrial effluent treatment plants to improve environmental conditions in Sindh.
Those who also spoke on the occasion are: Sindh Environment and Climate Change Minister, Ismail Rahoo; former chairman of Association of Builders and Developers Pakistan, Mohsin Sheikhani; Principal Secretary to Sindh Governor, Dr Syed Saifur Rehman; Dr Faiyaz Alam, General Secretary of Dua Foundation; Syed Nadeem Arif CEO EMC Pakistan and Dr. Kaiser Waheed Former Chairman PPMA.
NFEH President Naeem Qureshi, in his address said that his NGO had partnered with the office of Karachi’s Commissioner and Sindh Forest Department to plant 3,50,000 tree saplings to increase green cover in the city.
As many as 75 companies were given environment excellence awards on the occasion for showing distinction in the last year to improve environmental conditions. Seven other entities also received awards for doing tree plantation in the city.