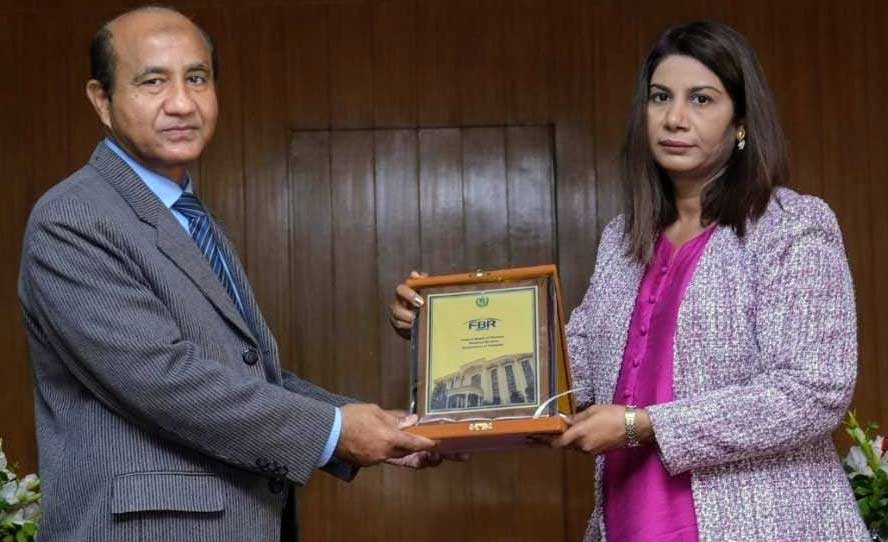 RAWALPINDI: Under the Letter of Understanding (LoU) signed between FBR and Ministry of Defenses’ Directorate of Federal Government Educational Institution Cantt. Garrison, Federal Board of Revenue has started to hold second phase of Educational Awareness Sessions in different educational institutes. Facilitation and Taxpayers Education Wing (FATE) of FBR held the first Educational Awareness Session in Federal Government Sir Syed College, Rawalpindi. In line with the vision of Prime Minister to promote the tax culture and under the directions of Chairman FBR Muhammad Javed Ghani, series of Awareness Educational Sessions will be carried out by FATE Wing in collaboration with Directorate of Federal Government Educational Institution Cantt. Garrison working under Ministry of Defense in different educational institutes.
Tehmina Aamer, Chief (FATE), FBR and Principal F.G. Sir Syed College Professor Ahmad Raza were the Chief Guests on the occasion. Sonia Anwar, Secretary FATE delivered a very informative and easy to understand presentation to the students on the structure of tax system and its significance in nation building. The students participated in a tax related quiz and won prizes.
Tehmina Aamer, Chief FATE said in her address that the purpose of holding these sessions was to promote the tax culture. She further said that students would learn about the significance of paying taxes in their initial years through these sessions which would help them make responsible taxpayers in their later years. “The students would help spread the message of paying taxes in their home, street and locality,” she added.
Principal F.G. Sir Syed College thanked the FBR Team to make this session successful. She hoped that such sessions would increase the knowledge of students about taxes and its significance in the economic progress. In the end, Chief FATE presented a shield to the Principal College.
Meanwhile, in compliance with Prime Minister’s special instructions and under the leadership of Chairman Federal Board of Revenue, Inland Revenue Enforcement Network (IREN) is actively targeting the illicit sale and transportation of cigarettes throughout the country. A special team of RTO Rawalpindi has seized 150 cartons of counterfeit and illicit cigarettes of various brands. The illegal cigarettes were being transported through a truck. It is estimated that sales tax and FED of Rs. 3375000 was avoided.