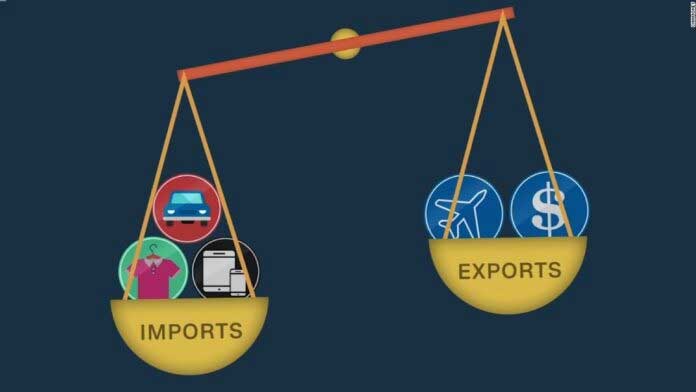 ISLAMABAD: Pakistan’s trade deficit has ballooned by 20 percent during the first nine months (July-March) of the current financial year, growing to $20.83 billionfrom $17.34 billion over the corresponding period of the preceding fiscal year.
According to data released by the Pakistan Bureau of Statistics (PBS), the trade deficit for the month of March 2021 was recorded at $3.395 billion compared to a deficit of $2.53 billion from February’21, showing an increase of 30 percent.
On a yearly basis, the trade deficit increased by 2.19 times, from the deficit of $1.498 billion in March 2020 to $3.395 billion in March 2021.
Exports from Pakistan during March 2021 amounted to $2.365 billion as compared to $ 2.068 billion in the previous month, showing an increase of 14.36% MoM and by 30.66 percent YoY, as compared to $1.810 billion in the same month a year ago.
Cumulatively, during July-March FY21, exports from Pakistan totalled at $18.688 billion against $17.443 billion during the corresponding period of last year, showing a jump of 7.14 percent.
Imports into Pakistan during the month under review recorded at $5.66 billion as compared to $4.6 billion in February 2021, marking a growth of 23.02 percent on a month-on-month basis and by 71.10 percent on a year-on-year basis as compared to $3.3 billion in March 2020.
Overall, the 9-month imports stood at $39.5 billion as against $34.79 billion during the corresponding period of last year, depicting a jump of 13.59 percent YoY.
The continuous decline in imports in the last two years had provided some breathing space to the government in managing external accounts despite a downward trend in exports. However, rebounding imports are likely to create pressures on the external side. The rise in imports in the coming months will place the incumbent government in real trouble on the external side. However, the growth in remittances at the movement will be sufficient to finance the import bill.
The value-added sector has warned the government about a possible shortage of raw materials in the coming months and urged the federal government to allow duty-free import of cotton and cotton yarn. The stakeholders had warned that export orders in hand will eventually be diverted to rival countries if the cotton yarn is not made available in the required quantity.
Accepting their demand, the Economic Coordination Committee (ECC) of the cabinet on Wednesday last withdrew customs duty on import of cotton yarns. – TLTP