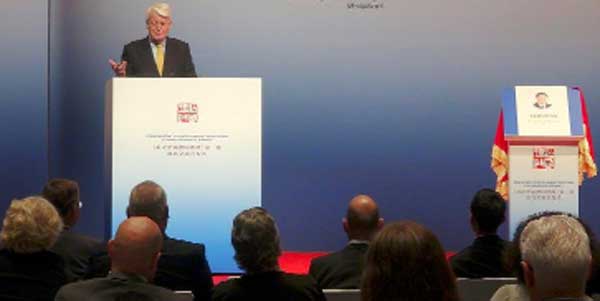 REYKJAVIK: Politicians, diplomats and officials from China and Iceland participated in a ceremony on Tuesday to launch the Icelandic edition of the first volume of Xi Jinping: The Governance of China, hailing the publication for enhancing exchanges between the two countries and helping the world better understand China.
Addressing the ceremony, which was held in Reykjavik, former Icelandic president Olafur Ragnar Grimsson welcomed the launch of the book’s Icelandic edition, and said that understanding China is vital for the world’s development.
Recalling his personal interactions with President Xi Jinping, Grimsson said he had been deeply impressed by Xi’s ideas on governance.
He compared the publishing of Xi Jinping: The Governance of China in different languages to a dialogue China is conducting with the world, and said the book’s Icelandic edition will further promote mutual understanding and friendly exchanges between China and Iceland.
Du Zhanyuan, president of China International Communications Group, said in a video speech that the Icelandic edition of the book provides an insight into the Communist Party of China’s people-centered development philosophy, the Chinese way of modernization and the common values of humanity that China has always upheld.
Chinese Ambassador to Iceland He Rulong said the Icelandic edition marks the first time that Xi Jinping: The Governance of China has been published in a Nordic language, testifying to the friendly relations between China and Iceland. – Courtesy China Daily