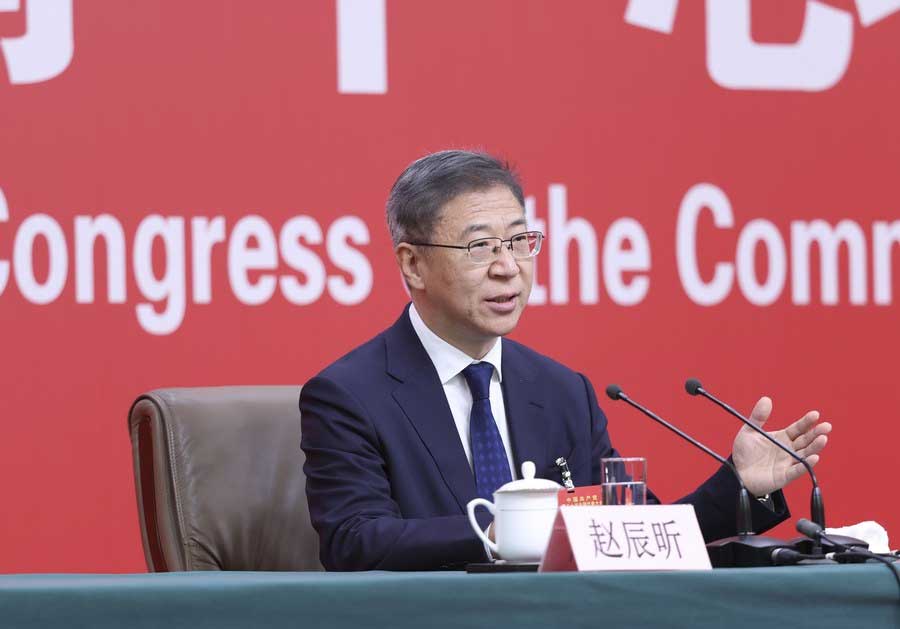 BEIJING: China’s economic development is expected to gain new strong impetus from the 20th National Congress of the Communist Party of China (CPC).
The Chinese economy has posted a notable recovery in the third quarter of this year, Zhao Chenxin, deputy director of the National Development and Reform Commission, told a press conference Monday on the sidelines of the ongoing congress.
Following a 4.8-percent growth in Q1, China’s GDP edged up 0.4 percent in Q2 due to the impact of negative factors like COVID-19 outbreaks.
“China’s economic performance has seen fluctuations this year, but logged a continuous trend of recovery in general,” Zhao said, adding that the country’s major economic indicators like consumption have been on the rebound curve thanks to a slew of supportive policies.
Zhao pointed out that China’s economic performance has stood out globally, citing the country’s mild inflation, generally stable employment and huge foreign exchange reserves. “The Chinese economy is facing some challenges, but more importantly, it’s brimming with opportunities.”
China has the world’s largest middle-income group, a comprehensive industrial system, a sound industrial chain and increasingly modern infrastructure, offering abundant market space for companies, Zhao noted.
The country’s orders for energy equipment, petrochemical equipment, mining machinery, construction machinery, machine tools and industrial robots are seeing significant increases following more support to boost weak economic areas, he said.
Most importantly, the Party congress will gather strong momentum and offer fresh impetus for advancing the country’s economic development, Zhao said.
The country will move faster to build a modernized economy, according to a report to the 20th CPC National Congress.
China will raise total factor productivity, make industrial and supply chains more resilient and secure, and promote integrated urban-rural development and coordinated regional development, so as to effectively upgrade and appropriately expand economic output, the report said.
“The report has encouraged us and boosted our morale,” said Jiang Deyi, chairman of Chinese carmaker BAIC Group and a delegate to the congress. “We will foster more edge in the field of new energy vehicles (NEVs) and contribute more to China’s strength in manufacturing.”
The economy has shifted from high-speed growth to high-quality growth, Jiang noted. The automobile sector is a vivid case in point.
Thanks to preferential policies, more than 4.56 million NEVs were sold in China in the first nine months, up 110 percent year on year, according to the China Association of Automobile Manufacturers.
To make the industrial and supply chains more resilient and secure amid the COVID-19, the country has introduced requirements to prevent arbitrary closing of major industrial chain firms and those supplying daily necessities. Constant efforts have been made to keep industrial parks, enterprises and logistics running smoothly, according to Zhao.
The government is pushing the implementation of pro-growth measures with a focus on addressing the needs of small and medium-sized firms, Zhao added.
“With the implementation of the guiding principles of the Party congress, the effective coordination of COVID-19 prevention and control with economic and social development, and the continuous effects of macro policies, the sound momentum of China’s economic recovery will be further consolidated,” Zhao said. Xinhua.