ISLAMABAD: A webinar to highlight the services of late highly acclaimed scholar, intellectual of repute and head of Futuristic Institute of Pakistan, Dr. Ikram Azam was jointly organized by Pakistan National Movement and Thinkers Forum Pakistan here Wednesday. It was actually prompted by Allauddin Masood former DGPR, Senate of Pakistan and encouraged by Azam’s students and many others. Bakhtiar Hakeem, editor of “Better Tomorrow” was chief guest and Allauddin Masood as guest of honour.
Heading the event M. Yousuf Aziz, President, PNM besides coordination the activity stated that Dr. Ikram Azam was an unmatched scholarly asset and scholarly manifestation for the county and nation. His main passions were creativity and original applied research besides, learning to live creatively: (i) Education as enlightenment (ARFAN) and (ii) Creativity and literary genres.
After playing eighty plus innings, in his splendid life, he left this mortal field for his eternal abode in early morning few days earlier, reportedly whispering to his personal attendant that some guests are around asking him to accompany them.
Allauddin Masood said that Dr. Raja Muhammad Ikram Azam was a versatile person blessed with many abilities. He was an intellectual, scholar, educationist, philanthropist, poet and writer of great merit who authored around 125 books in English, ranging from fiction and verses to research studies on Pakistan, Islam, Geopolitics, Peace and Strategic Studies, International Relations and Futuristic.
He said that “Futuristics has emerged as a vital, integral and essential ingredient of planning, particularly in countries having more developed economies. There we find a stream of trained, intelligent and committed people providing guidance and advice to the State and other organizations about the likely shape that events could assume in various situations.
Dr. Ikram Azam could rightly be called the founding father of Futuristic in the country. He is the first person from Pakistan who studied Futuristic as a social science and obtained post-graduate degree from the University of Houston (Texas: USA) and Ph.D and D.Litt. from the American University, London. The C.D. (Cultural Doctorate) was conferred upon him in 2000 by the World University, USA, for his contribution to the Futuristic Philosophy. In 1983. He earned distinction being the only non-American recipient of the Warner Bloomberg Award for Excellence in Future Studies.
After superannuation for the federal services, Dr. Ikram Azam taught at the NIML-NUML to the M.A. English classes as a Visiting Professor faculty member and, later, as Dean of National Institute of Modern Languages, Islamabad, Faculty of Advanced Integrated Studies for a couple of years.
Professor Daud Kamal from Peshawar, paying him tributes to Dr. Ikram Azam opined that very few people knew that there were some excellent writers in English in Pakistan and Dr. Ikram Azam was one of these intelligent souls. In fact, he was in the vanguard. Many budding writers in English have benefitted by his advice and encouragement.
Well known poet, writer former DG, Academy of Letters & Urdu Science Board Khalid Iqbal Yaser was appreciative of his unique style of prose crisp and cogent poetic diction. His inquisitive nature and search of truth always kept him filly engrossed in creative work.
Col (Retd) Bakhtiar Hakeem, Editor “Better Tomorrow”, Thinkers Forum of Pakistan said that he was man of excellence and high achievements for superior cause of humanity, Islam and Pakistan. He was a regular contributor to “TFP” & PFA, ever ready to share his views and opinions with colleagues and readers of “Better Tomorrow”.
Dr. Fauzia Tanveer Sheikh, Principal, Home Economics College, though hard pressed by her recent assignments, yet planning to attempt a detailed appraisal of her ever-dedicated teacher said that Dr. Ikram Azam had remained always an unending source of inspiration and guidance for her. He was the one who prompted her in the PhD programme, helped me all out to complete it besides ensuring publication of her thesis by PFI and Margalla Voices, Islamabad making her proud to be her student.
In view of Dr. Ikram Azzam’s life-long contribution to the cause of literature, academic pursuits and especially familiarizing the academia and younger generation, the incumbent authorities were urged upon to convert Islamabad Club into public park and name it as Dr. Ikram Azam Park. The participants shared the grief of his sad demise with his son Ayzed Akram family members and prayed that May Almighty Allah grant him all his benedictions. 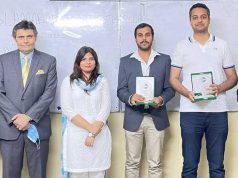 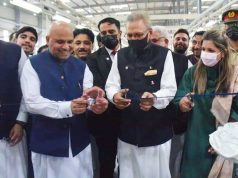 Careem, CF to take more kids ‘off streets & into schools’