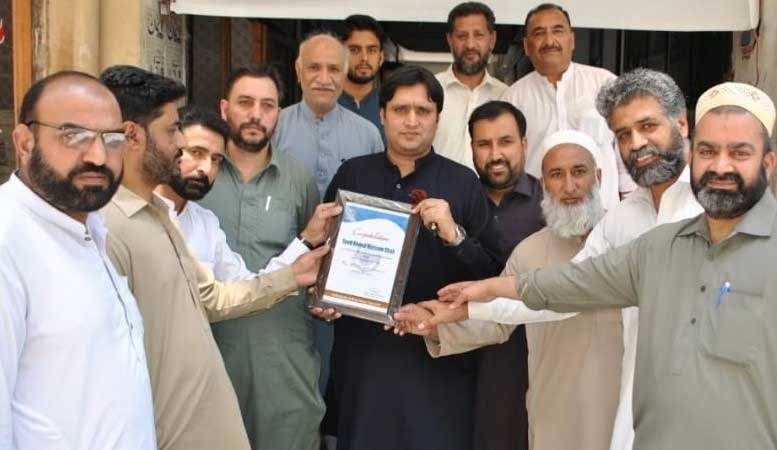 ABBOTTABAD: Abbottabad Business Council Program in honnor of 4th CPEC Communication Award winner senior journalist/analyst and Special Correspondent of ‘The Financial Daily International’ in Abbottabad Syed Kamal Hussain Shah, here Friday.
The certificate ceremony was held in Abbottabad Gami Adda in which Chairman Abbottabad Business Council (ABC) Sultan Ahmed Khan, Waseem Ali Malik, Syed Iftikhar Shah and other trade leadership presented certificate Shield to Syed Kamal Hussain Shah on wining 4th CPEC Communication Award.
Speaking on the occasion Chairman (ABC) said that the massive Chinese investment in Pakistan is the result of Pak-China friendship. Pakistan and China are not only neighbours but also brotherly countries. It is great honour for us that our area Journalist Syed Kamal Hussain Shah has won the Award. It helps us to bring traders of both the countries closer and in future we will be able to identify joint venture in Hazara Division.
Waseem Ali Malik said that this honour is a driving force and play his part in strengthening China-Pakistan ties. We hope its build more sound with china Shah done great jobs and we all business men appreciate him plus thank China for award Syed Kamal Hussain Shah, he played sound role in friendship and positive role in development China-Pakistan Economic Corridor news and information. Syed Iftikhar Shah said its bring closer and closer we thanks award over Journalist 4th CPEC Commination Award .its helps us more closer to China traders we can start joint venture at low levels with local traders.
Syed Kamal Hussain Shah thanked China for award of Abbottabad Business Council and said that it was an honor for him to be given the 4th CPEC Communication Award Award 2022.
He said he is grateful to the China Economic Net and Pakistan China Institute who due to CPEC brought a large-scale Chinese investment to Pakistan, provided employment to millions of people in Pakistan and has also generated a lot of foreign exchange for the national treasure.
He vowed to work hard to contribute to economic cooperation & cultural exchanges between China and Pakistan, China’s Belt and Road Initiative (BRI) flagship corridor and the China-Pakistan Economic Corridor.
He said these project breing close partnership to build new transportation & power infrastructure across the country, it establishment of multiple special economic zones & fiber-optic cables running from China to Pakistan. “game changer,” and it improved Pakistan’s infrastructure, created thousands of jobs, and boost economic growth.