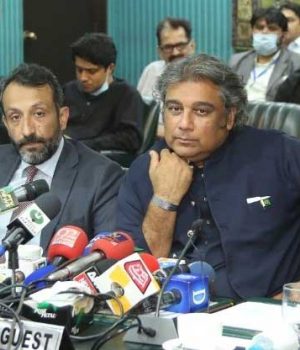 LAHORE: Federal Minister for Maritime Affairs Ali Haider Zaidi has announced formation of an Advisory Committee, consisting representatives from the Chambers, Ministry and other relevant departments, to resolve demurrage and other related issues. The Minister further stated that he would be visiting LCCI again soon along with Chairmen of Karachi Port Trust and Port Qasim Authority to the resolve the issues of business community.
He was speaking at the Lahore Chamber of Commerce & Industry. LCCI President Mian Tariq Misbah and Vice President Tahir Manzoor Chaudhry also spoke on the occasion while Former LCCI President Sohail Lashari, former Senior Vice President Amjad Ali Jawa, former Vice President Zeeshan Khalil and Executive Committee Members were also present.
Minister said that the Advisory Committee would play a vital role in resolving the demurrage and other issues being faced by the business community.
He invited the Lahore Chamber of Commerce and Industry to visit Karachi Port Trust, Port Qasim and Gwadar to explore the emerging opportunities of new shipping policies. The Minister shed light on the working of ports and shipping and said that his ministry had inherited multiple problems and he was trying his optimum best to resolve the same.
“We are going to give great news to the nation about Gwadar Port very soon”, the Minister said.
He said that ports in Karachi fell under his domain but its terminals had been handed over to private sector on long lease.
He said that State Bank of Pakistan had allowed Pakistani investors to avail the facility of long-term finance for purchase of ships and development of its related infrastructure.
He said that ships registered in Pakistan would enjoy the facility of preferential birthing. Similarly, the ships purchased under the policy could avail exemption from Custom Duty, Income Tax and Sales Tax till 2030, he added.
He said that Pakistani investors could purchase their own ships and hand over its management to Pakistan National Shipping Company but its bills would be paid in Pakistani rupees not in dollars.
He said that Pakistan has five terminals for containers loading and unloading. He said that the Ministry got various port charges waved off but could not get approval for the removal of terminal charges.
Minister said that Blue Economy could change the faith of the country. He said that country is spending $ 5.5 billion annually on imports freight bill. He said that action against the grabbers of KPT land is well under way.
LCCI President Mian Tariq Misbah said that there are some shipping companies which are continuously violating their manifestation as the containers are often offloaded at such ports which are not mentioned in their designated route. Resultantly, the consignees have to bear extra cost in the shape of demurrage and warfare charges which are paid in dollars.
He said that the officials at Terminals and Ports do not waive the demurrage charges and the consignees are totally helpless because the consignments are already delayed due to this irresponsible conduct of shipping lines.
He said that during the tenure of this Government, the Terminal Handling Charges have been increased to an exorbitantly high level. Similarly, the Port Storage Charges and Container Detention Charges have also been increased immensely which need to be brought down.
Mian Tariq Misbah said that the Container Security charges which are taken by the Shipping Companies are considerably higher for the up-country businesses as compared to the businesses based in Karachi. We recommend that these charges should be uniform for all the businesses that clear their consignments in Karachi, regardless of which part of the country they belong to.
He said that another issue is related to issuance of Delivery Order (D/O) which used to be issued directly upon making the payments. Now the businesses have to wait for 1 to 2 days to obtain the D/O and if endorsement is required then additional cost has to be born.
LCCI President said that the charges of shipping companies are already too high and all the factors are further adding up in the overhead expenses of industry that is presently facing the toughest times of history. He proposed that all these charges should be rationalized so that we remain regionally competitive.
He said that the container examination techniques employed by the staff of the Ports are often inappropriate and result in messing up the packaging and also spoiling the trading items. We recommend that proper training of staff should be done in this connection to make them better professionals.
The LCCI President said that there has always been dearth of export containers in Lahore. Ministry should take all the possible measures to ensure the availability of sufficient number of containers for the exporters throughout the year.
He said that government has recently introduced the new shipping policy to attract private sector investment in this sector. We would like your team to apprise our members in detail about the incentives provided to the private sector under this new scheme.