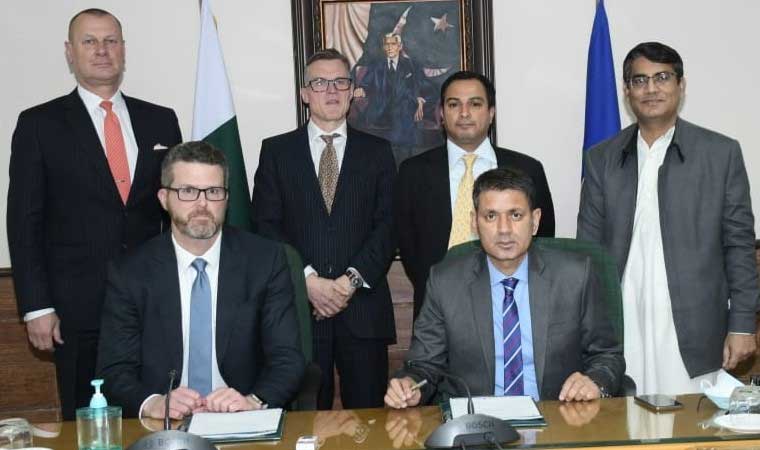 ISLAMABAD: A Contract has been signed between Federal Board of Revenue (FBR) and AJCL along with its lead partner Authentix Inc. USA and Mitas Corporation of South Africa to operationalize Track & Trace Solution on Tobacco, Cement, Sugar and Fertilizer Sectors here at FBR Headquarters, Islamabad Friday.
Dr. Muhammad Ashfaq Ahmed, Member (IR-Operations), FBR, Kevin McKenna, CEO and President of Authentix Inc USA, Sten Bertelsen, from Mitas Corporation (Pty) South Africa and Omer Jaffer CEO of AJCL Private Limited signed the Contract on behalf of their respective organizations.
The Track and Trace Solution is to be rolled out across the Tobacco, Cement, Sugar and Fertilizer Sectors from 1st July 2021 in Pakistan with a view to enhancing tax revenue, reducing counterfeiting and preventing the smuggling of illicit goods through the implementation of a robust, nationwide, electronic monitoring system of production volumes and by the affixation of more than 5 billion tax stamps on various products at the production stage, which will enable FBR to track the goods throughout the supply chain.
Dr. Muhammad Ashfaq Ahmed, Member (IR-Operations), FBR welcoming the CEO Authentix and other members of the Consortium remarked that FBR shall be working closely with AJCL Consortium during the rollout of the program across different industries on very aggressive timelines.
Kevin McKenna of Authentix stated that like in other countries, it is expected that the Program would help provide a transformational boost to the local economy, enhance revenue and make the tax collection process more transparent for the benefit of industry.
Omer Jaffer, CEO AJCL, remarked that the Consortium was looking forward to working with FBR to configure and implement the various components of the solution, including the tax stamp application and production monitoring equipment and ramping up the production of the specialized tax stamps that will act as unique identification marks on the products.
It is believed that installation of the track and trace system in the specified sectors would be a game changer and would bring more than 45million tons of cement, more than 4 billion sticks of tobacco cigarettes, more than 4million tons of sugar and more than 30 million tons of fertilizer into the tax net as well enhance digitization of economic activity, improve revenue forecasting and curb counterfeit products in the market.
Meanwhile, Inland Revenue Enforcement Network (IREN) and Directorate General, Intelligence and Investigation-Customs have intensified countrywide operations against smuggled and Non-Duty paid cigarettes. IREN has confiscated 11.7 million cigarettes worth Rs. 45 million involving duty and tax evasion of Rs. 24.4 million. Similarly, in another operation carried out by Directorate General, Intelligence and Investigation-Customs, huge quantity of smuggled cigarettes and Gutka valuing Rs. 80.1million has been seized which was concealed at Bolton Market, M.A. Jinnah Road, Karachi. FIR has been lodged against the guilty persons.
In pursuit of Prime Minister’s vision and special instructions of Chairman FBR, crackdown against counterfeit, smuggled and non-duty paid cigarettes is in full swing. Inland Revenue Enforcement Network is active in all parts of the country to restrict the trade of illegal cigarettes. The teams of IREN are working under Regional Coordinators in all major cities of the country and Central Coordinator, Intelligence and Investigation, Islamabad.