No country or nation in human history has surprised the world so much as the Chinese did. Indeed China’s story and journey towards economic supremacy and their commitment towards establishing a shared future boosting cooperation in competition is so unprecedented that it has proven to be a virus of positive change. Unlike the nature and compulsion of a country in the race of becoming a Super Power; crushing other competitors, using manipulative tactics, and exploiting their vulnerabilities, China seems to have opted for a noble path to purse a journey of economic progress through encouraging an environment which suggests development for all through positive competition.
One wonders that a country once forced to indulge in drug addiction by the satanic desire of British colonial madness to subjugate nations had escaped to become a hope for all the nations yearning to break the yoke of poverty. Indeed Oct 1, 1949, not only reminds us of an unshakable resolve of Mao Zedong to lead a revolution successfully but also of how nations may decide to evolve into honorable nations from unforgiving circumstances. The story of China emerging as a very strong economic and political force has baffled many who could not imagine a nation so surprisingly first becoming a major regional power.
The economic growth during Mao Zedong’s regime may not have shown unbelievable results but indeed it had ideologically disciplined the Chinese people to honestly try any strategy which might result into better living standards. It was this desire to put China to a path of development which led Mao Zedong to devise five-year policy focusing on industrialization. Although the pace of economic growth was not robust, but it was people oriented. The Chinese economic objectives since then had been absolutely vivid; they were based on the philosophy of provision of equal opportunities for all. This philosophy of economic development for all ensued from Chairman Mao Zedong’s vision to help establish a society where profits are asumed to be a shared property and the fortunes do not accumulate in certain hands shaped the future of China’s economic model.
The turning point in China’s struggle to achieve economic supremacy came after 1978. The Chinese leadership’s will to introduce massive economic reforms by opening up China to the world through controlled liberalization of its economy, and it did keep a certain degree of check so as to control the potential inflation. China did allow foreign investments and free market to a certain degree which ultimately helped establish more industries and ensured technological upgradation as well as building a strong network of infrastructure. More importantly China’s reforms did not only focus on certain urbanised regions, rather it was a wholesome package inclusive of plans for the rural areas as well. Small rural enterprises were encouraged along with huge structural transformations in the agricultural sector which ultimately led China to exceed international food security standards for self-sufficiency. Such steps helped control the rural-urban development gap and restrained the threat of regional disparities. One of China’s specialities in its ever increasing exports both in volume and market share is due to its flexibility to address the needs of the purchasing power capacity of all classes. This provided a leverage to China’s exports over other big industrial countries like USA, Japan and European industrial giants and hence made China the world’s second largest economy exceeding Japan in 2010.
Another big achievement of China’s economic model is the poverty alleviation drive. President XI Jinping claimed that China has takennearly 100 million people out of poverty. What really makes the Chinese poverty alleviation plan a big success is the fact that China doesn’t artificially manipulate the figures to just reflect the growth of its bulgening GDP digits as a proof of its prosperity rather focuses on the improvement of standard of life of its people and raising the per capita income in true sense. 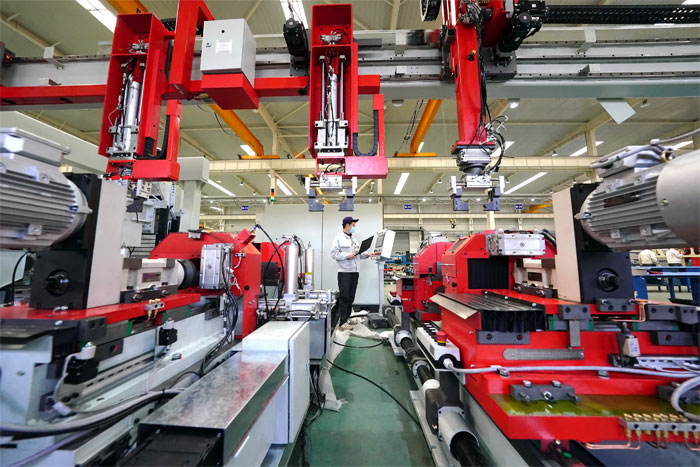