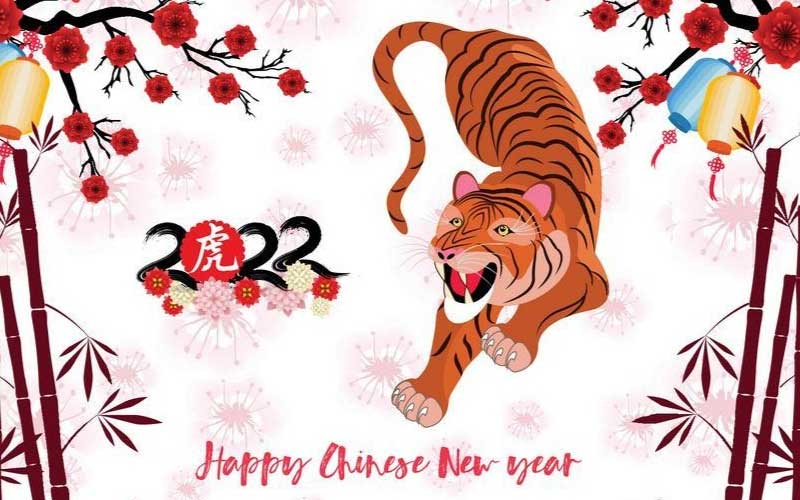 Chinese New Year or Lunar year also known as spring festival is around the corner which is celebrated across China, South Korea, Tet in Vietnam, and TsagaanSar in Mongolia as well as in Western world cities like, New York, London, Vancouver, and Sydney. The date varies every year but always falls between the periods from January 21st to February 20th based on the cycle of moon and sun. The Chinese calendar is linked with 12 zodiac animals with specific characteristics.
Chinese Lunar Year 2022 will fall on today, February 1st, 2022, Tuesday, heralds the Year of the Tiger, according to the Chinese zodiac sign. The tiger is considered as the king of the beasts in China and stands third in the Chinese zodiac. The qualities attributed to tigers are confidence, bravery, great will power, strength and competitiveness. It is one of the most glaring, colorful, important and prominent events in China to honor ancestors and deities. Chinese wish a happy New Year to their beloved ones by saying “Xinnianhao”.
Chinese New Year festival is observed and celebrated with traditional zeal and fervor by more than two billion people with family get-togethers, feasts and outdoor spectacles including firecrackers, fireworks and often dancing dragons. The dead ones’ graveyards are also visited the day before Chinese New Year’s Day. Houses are cleaned thoroughly to get rid of the lingering bad luck. Lunar year celebrations last until following the full moon or typically for 15 days. The last day of celebrations is marked by the Lantern Festival. Chinese Lunar Year is a time for families to be together. People are expected to be home to celebrate the festival with their families’ thus the Chinese government gives consecutive 7 days of official public holidays to celebrate spring festival. The children and young ones are given money in red colored envelopes. Red is the auspicious color for the festival. People wear red as a sign of good luck, energy & prosperity and also decorate their houses with red color associated denoting cheer and happiness to ward off evil spirits and negativity. Sacrifices are offered to the ancestors. Dragon, which is a good fortune symbol in China, a lion or dragon dance is the main feature of the New Year celebration and a long dragon is carried through a procession or parade in the streets by the excited dancers. The families in China focus the eve with family reunion dinners with extravagant meals like Jiaozi which is supposed to be lucky which resemble traditional coin purses in ancient times, representing wealth and abundance. Another famous menu item is Niangao, a rice cake that can be either sweet or savory. Noodles according to Chinese tradition represent long life, thus it is also prepared. A whole fish which signifies prosperity is also served to bring good fortune for the upcoming year. White color is avoided so as to stay away from mourning or deaths in the New Year. The Scissors and knives are also avoided so as to prevent cutoff of ties with the relatives or loved ones. Washing of hairs or haircuts are also avoided so that one’s fortune should not be washed away. Laundry or clothes wash is done after three days so as to avoid disrespect to the god of water. Garbage is not taken out during New Year’s days so that wealth and good fortune should not be swept out of the house. These superstitions are an inevitable part of Chinese culture based on their ancient rites passing through the ages as firm beliefs. New Year is preceded with a grain of salt.
The lunar New Year 2022 which is commencing from today, 1st February is unique in the sense for China this year as Beijing Olympics are also taking place the same month which will be inaugurated by President of the People’s Republic of China Xi Jinping, general secretary of the Chinese Communist Party.
Spring Olympics Beijing amidst the New Chinese Lunar Year hasn’t happened before in history. The official motto for Beijing 2022 Olympics slogan is “Together for shared future” per China’s willingness to establish world peace. The Olympic Cauldron will be lit in a way “unprecedented in the over 100-year history of the Olympic Games. The opening ceremony of Spring Olympics beside Chinese Lunar Year will “showcase the beauty of nature, of humanity and of sports to give strength and hope to the pandemic-ridden world.
Chinese New Year is an important time of the year for not only individuals and families, but also for businesses in China, it is often a time to re-group, re-strategize, and re-staff for the upcoming year as Chinese are the most organized nation of the world which guarantees its success across the globe.
President Xi Jinping in his message has said that “the Chinese people will present to the world a fantastic, extraordinary and excellent Olympic Winter Games in Beijing to boost exchanges and mutual understanding between the Chinese and other civilizations of the world”.
My heartfelt and warm New year greetings “Xinnianhao” to our all-weather friend China, its great President Xi Jinping, People of China, Consul General of China in Karachi H.E. Li Bijian and Chinese Ambassador to Pakistan, H.E. NongRong .
Long Live China