ISLAMABAD: In a bid to discourage smuggling, special joint teams of the Federal Board of Revenue (FBR) will begin conducting inspections of all the markets across the country from Monday wherein import documents of all foreign products/items will be checked.
The special teams have been set up on the directions of the FBR chairman. The chairman had tweeted on Saturday that an anti-smuggling campaign was being launched.
In his anti-smuggling slogan, he said that this illegal activity affected the local manufacturing industry as well as cast negative effects on domestic employment and government revenue.
“We all should stop purchasing smuggled products,” he added.
The teams comprise officials from Directorate of Customs Intelligence and Directorate General Intelligence and Investigation Inland Revenue and other departments.
The teams would visit markets in all the big cities across the country and would check the imported items.
A letter by Special Assistant to the FBR Chairman Zubair Bilal written to departments and the FBR members stated that smuggled consumer items were freely available in the markets of the country, which was affecting the economy negatively. “Especially the industrial activities are suffering because smuggling of consumer goods into the country,” he stated.
According to the letter, the government of Pakistan was taking many steps to end this menace. “Many effective clauses have been included in the Finance Act 2019 and steps have been taken to strengthen the FBR,” stated Bilal in the letter. “To eradicate smuggling, the FBR has started a phase-wise programme, under which, a process of verification of documents of imported goods available in the markets is being initiated.” 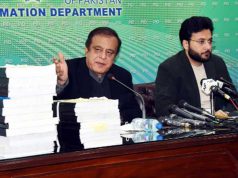 Sindh govt to probe Ali Zaidi for statements on JIT:...

US dollar goes up by 2.5 rupees