KARACHI: “FBR accords importance to taxation matter of exporters and believes in speedy refunds of their monies which is actually the investment of exporters. Timely refunds will enable the export industries for further investment which will ultimately bring foreign exchange to the country and shall also generate revenue for the exchequer. FASTER plus is processing refunds in 42-72 hours while refunds process has been improved with speedy refunds in general. However, particular cases of exporters and all the legitimate pending matters of exporters in the hands of Corporate Tax Office, Karachi shall be resolved on priority basis.” This was stated by Dr. Aftab Imam, Chief Commissioner, Corporate Tax Office (CTO) Karachi during his visit to PHMA House, Karachi today for meeting with exporters registered with Corporate Tax Office Karachi, says a Press release.
Earlier Tariq Munir, Chairman (SZ), Pakistan Hosiery Manufacturers & Exporters Association welcomed the Dr. Aftab Imam, Chief Commissioner, Corporate Tax Office (CTO) Karachi who was accompanied by Zulfiqar Khokhar, Collector to PHMA. Speaking on the occasion, Muhammad Jawed Bilwani, Chief Coordinator & Former Central Chairman, Pakistan Hosiery Manufacturers & Exporters Association invited the attention of Chief Commissioner CTO-Karachi on burning issue of exporters related to Sales Tax Refund/Audit, Income Tax Refund/Audit, Zero Rated Certificate for reduced tariff of electricity and gas and other issues.
He was of the view that after a lapse of 16 months, after various consultative sessions, suggestion of exporters, FASTER refund system has been improved and also transformed to FASTER plus which is appreciable as the system is efficiently processing the refunds electronically upto 80% without human involvement. Remaining 20% may have some issues of filing which after resolution shall also be processed on fast track. He was of the view that due to speedy refunds increasing trend in textile exports is witnessed. He stated that several members have informed that still amounts are missed and deferred in the FASTER system which should be looked into and rectified. He proposed that total missing amount should be reflected in the Sales Tax Refund MIS.
Bilwani also highlighted the Masood, Joint Secretary, Diabetic Association of Pakistan (DAP), Professor & Head Department of Obstetrics and Gynaecology Isra Medical University Karachi talked on the topic of “Screening of Diabetes in Pregnancy – Why, When, How”. She defined Gestational Diabetes Mellitus as glucose intolerance that begins or is first diagnosed during pregnancy and usually resolves after delivery. One in seven births is affected by gestational diabetes mellitus. Gestational diabetes mellitus is a substantial and growing health concern in many parts of the world. Pakistani population is especially vulnerable to developing this condition because of genetic, social, and environmental factors. Gestational diabetes has serious, long-term consequences for both baby and mother, including a predisposition to obesity, metabolic syndrome and diabetes later in life.
Prof Abdul Basit said diabetes emerged as a major health concern in Pakistan. Incidence of diabetes is rising worldwide. It is all due to unhealthy lifestyle and unawareness of disease. He said type 1 diabetes cannot be prevented but type 2 diabetes can be preventable by adopting good lifestyle that is “Eat less-Walk more”. There is need to increase awareness at all levels of society.
Chief guest Lt Gen (Retd) Moin Uddin Haider, HI (M) former Governor Sindh/Former Federal Minister of Interior applauded Diabetic Association of Pakistan’s efforts towards the improvement of diabetes care in Pakistan. He emphasised on the prevention and best management of diabetes to avoid complications.
A panel of experts comprising Prof Abdul Basit, Prof Ahmed Bilal, Prof M. Zaman Shaikh and Prof Shabeen Naz Masood replied the questions raised by the audience.
Prof Abdul Basit thanked the chief guest and participants of making the programme a success.
Later on chief guest inaugurated the pharmaceutical exhibition organised by the pharmaceutical companies. 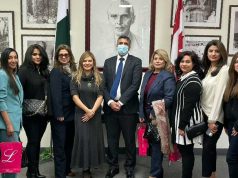 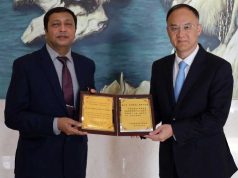 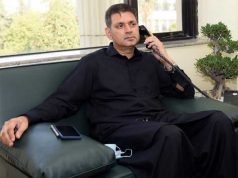 LCCI to be part of economic policy formulation: Suri