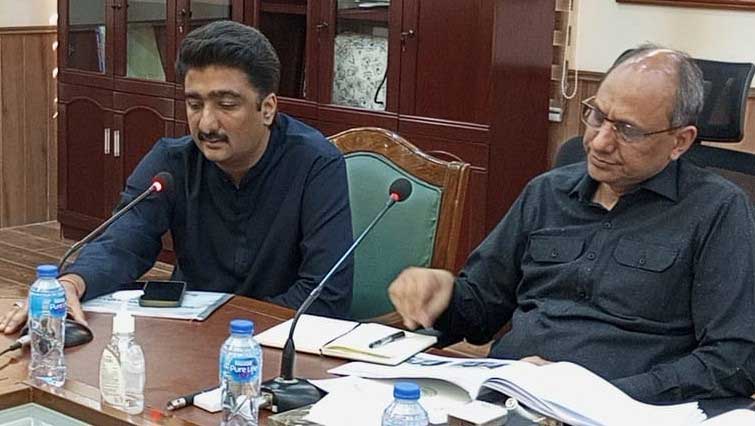 MIRPUR KHAS: A news release says that Sindh’s Provincial Minister for Labor and Manpower, Saeed Ghani, led an important meeting with the Mirpur Khas district administration to talk about the situation after the heavy monsoon rains. The meeting took place in the office of the Commissioner.
MPAs Hari Ram Kishori Lal, Syed Zulfiqar Ali Shah, Mir Tariq Talpur, Additional Commissioner Dr. Ali Nawaz Bhoot, Deputy Commissioner Mirpur Khas Zainul Abidin Memon, Assistant Commissioners of the district, senior officers from related institutions, such as health, revenue, highway, public health engineering, and others, were also there.
Later, a full report on what was going on in all of the districts of the Mirpur Khas Division was given.
At the moment, the rain has affected all of the districts in the Mirpur Khas Division. So far, more than 57 emergency camps have been set up for people who have been affected by the rain in different parts of the districts. People get two meals a day and other things they need at these camps.
During a meeting, Zainul Abdeen Memon, the Deputy Commissioner of Mirpurkhas, told the Minister of Labour that the PDMA gave us 3,000 tents, but we need a lot more. At this time, the provincial government and police will also be needed to keep Jhodo, Digra, and Sindhri safe and secure.
We need easy-to-use transportation that can get us to all the people who are still in water areas so we can help them. At least 1 million tents are needed in the Mirpur Khas district. Since a week ago, PDMA has done nothing to help Mirpur Khas.
A member of the Sindh Assembly named Syed Zulfiqar Shah told us that we should ask the army to help drain water from places like Sanghar, Khipro, Hangurno, Mirpur Khas, and others. Hari Ram Kishori Lal said that if the right plans aren’t made, the results can be very bad. If you drain the water, you won’t be able to help the people who were hurt or grow crops like rice.
Mir Tariq Talpur, a member of the Sindh Assembly, said that 15 to 16 lakh people in Mirpur Khas, Sanghar, and other districts won’t be able to drain their water if the water isn’t cut off at the zero point.
People in Mirpur Khas who had to move because of the rain will be able to return home. The irrigation officer said that 15 to 20,000 people from 300 small villages will have to move before the water is turned off at zero point.
Right now, our spinel is being pushed by 200% more than it can handle. Our ADP has a plan to make more spinel, but because of the monsoon, no work could be done on it. People who were hurt in Mirpur Khas need to go to the hospital right away.
He said that if there aren’t enough doctors, some can be hired as volunteers and others can be hired every day to do more tests for malaria and dengue.
He asked that everyone in the district get a lot of Malaria Rapid Kits. Right now, more than 100,000 sick people with different diseases need to see a doctor right away. People with diarrhoea, dengue, and other diseases should be able to get emergency care in all taluka hospitals, even the civil ones. So, the SESSI will also have medical campuses and all kinds of medical help, all of which will be run by the labour department.
The Sindh government will do everything it can to make sure everyone has access to enough medicine. As soon as possible, roads should be fixed. Due to the tents on the link road and main roads, if they can’t be fixed right away, work should begin as soon as the people who were affected by the disaster return to their homes. He also said that the party’s co-chairman, President Asif Ali Zardari, told him to send me here. This is a tough and hard time. Right now, we need to think about people, not ministers, MPAs, or officers. People who lost their homes, food, and everything else are in a lot of pain, so everything they say will be bitter. Please don’t rush.
Allah won’t forgive us if we don’t help other people by being good people. Right now, Sindh needs more than 10 million tents, but we don’t have enough. People all over the world have asked for this.
We also need the help of welfare and social organisations to reach the affected people, and I will meet with them tomorrow, Monday. Monday, there were also a lot of NGOs, social welfare groups, and other groups here to make sure that more steps were taken right away. Minister of Labour Saeed Ghani said, “The top leaders of the PPP gave me a job to do here, and I have to stay here for a long time to do it.”