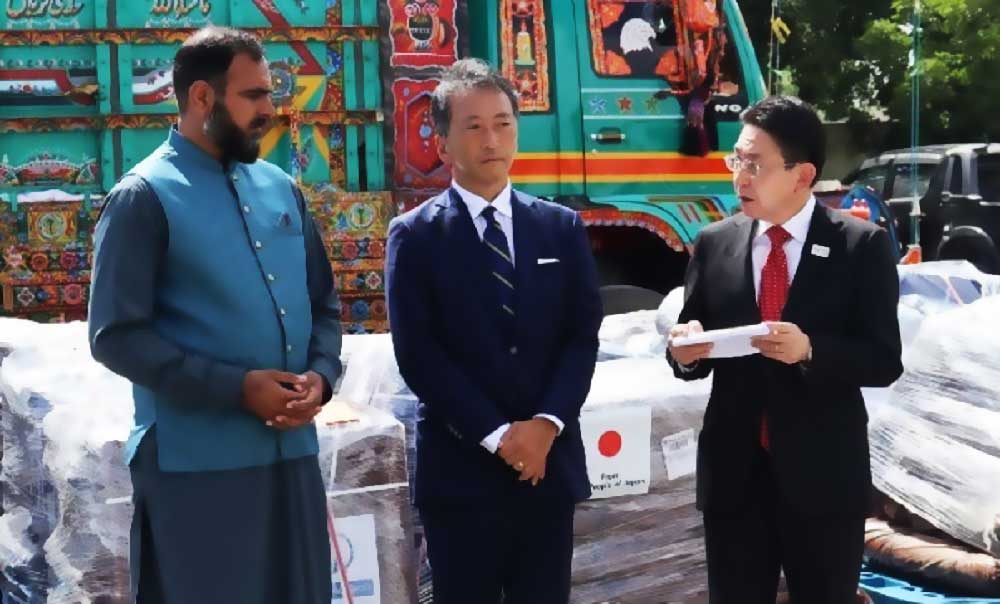 KARACHI: In the presence of Odagiri Toshio, Consul-General of Japan in Karachi, Kinoshita Yasumitsu, Chief Representative of Japan International Cooperation Agency (JICA) Pakistan Office, gave tents and plastic sheets from the Japanese government to the National Disaster Management Authority (NDMA) on Saturday at the Jinnah International Airport in Karachi.
After the Government of Pakistan asked the Government of Japan for these goods on August 29, the Government of Japan decided to send them through JICA. Balochistan Province got the first shipment of goods, which was given to them on August 31.
Odagiri said that Japan is very saddened by all the damage that the unprecedented flooding in Pakistan has caused, which is worse than the devastating floods of 2010, and hopes that these goods will help the people who have been hurt. He also said that people in the affected areas need a lot of food, water, and medicine, and that the United Nations has sent out an appeal for help.
So, the Government of Japan will keep working closely with the Government of Pakistan, and the Embassy of Japan, the Consulate-General of Japan, and JICA will work together to deal with the situation.
Kinoshita told the grieving families who had lost precious lives and loved ones that he was sorry for their loss. He said “Japan has also had a lot of bad things happen to it in the past. The whole JICA family is with you during this hard time. Disaster management is an area where JICA and the government of Pakistan have worked together for decades. With help from JICA, the government of Pakistan made its first plan for dealing with disasters in 2012. This plan is now being updated for the next 10 years.
With the motto “Build Back Better,” JICA has promised to help the Government of Pakistan with relief, recovery, and rehabilitation.”
He also said that he had a lot of respect for the hard work and help that NDMA had given to get through this disaster.
Muhammad Muazzam Zaman, a representative of NDMA, talked about how the disaster affected different areas and what the Pakistani government was doing to help. He also said that they were thankful for Japan’s help and would make sure that the supplies got to the people who needed them.