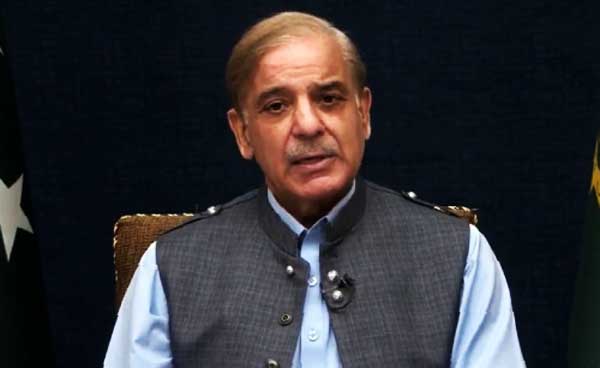 ISLAMABAD: Prime Minister Shehbaz Sharif on Thursday said the International Monetary Fund (IMF) was not ready to trust the PML-N government because of the actions of the previous government as he took the party senators into confidence over political and economic decisions.
The prime minister criticised the Pakistan Tehreek-e-Insaf (PTI) for pushing the economy to the brink of bankruptcy and said the PTI government led by Imran Khan signed an agreement with the international lender to increase the levy on fuel prices, but refused to abide by the agreement.
If the PTI had no intention of fulfilling the agreement then they should not have agreed to these conditions, said Shehbaz.
“It was a difficult moment for us,” he said and added that the country will face difficult times going forward.
The prime minister said the IMF deal would also pave the way for funds from the World Bank, Asian Development Bank, Islamic countries, and other money lending institutions.
It would be the job of the coalition government to consolidate these gains, he said, adding that Pakistan could not ask China and Saudi Arabia for money every time. “These countries must be wondering when Pakistan will stand on its own feet,” he added.
The premier further said the coalition government led by the Pakistan Muslim League-Nawaz (PML-N) will stay for the 14 remaining months.
In the meeting with the senators, Shehbaz said the coalition allies had initially planned to call snap elections after electoral reforms but later it was decided to complete the full term of the incumbent government.
Shehbaz also said the PML-N supreme leader, Nawaz Sharif, was not happy with the increase in the prices of petroleum products but it was necessary as the “state comes before the politics”.
The premier further said the government was aware of load shedding and was taking measures to eradicate the outages.
However, it will take some time to fix the issue. According to Shehbaz, he would “never lie” to the nation as the PTI did.
NNI adds: Meanwhile, Prime Minister Shehbaz Sharif on Thursday stressed the use of modern technology for the exploration of minerals and also for effective utilization of raw materials for power generation.
The prime minister stated this in a meeting with a delegation of All Pakistan Mines and Minerals Association led by Minister for Housing and Works Maulana Abdul Wasay.
The meeting discussed various sessions of discussions carried out to harmonize the exploration and drainage system of high quality coal, iron ore and other precious minerals keeping in view international standards.
He directed to take benefit from the reserves of coal in Thar and Lakhra and also the iron cores in Mianwali and Chiniot.
The Prime Minister directed to present a report on the development of the mining sector in the country and also set up a committee comprising representatives of the Ministry of Energy, Ministry of Industry and Production, Federal Board of Revenue and other relevant provincial
commissions.
In addition, the Prime Minister directed to form a sub-committee headed by the Petroleum Minister Dr. Musaddiq Malik, to oversee the development in mining sector.
Meanwhile, Prime Minister Muhammad Shehbaz Sharif on Thursday directed the National Highway Authority to get the Murree Expressway project vetted by the Chinese experts to make it sustainable against snowfall, land sliding, and erosion.
The prime minister, in a briefing by the NHA on the rehabilitation of the Murree Expressway, pointed out the frequent damage to the road and the retaining wall which he said raised questions on the design and quality of the work.
Citing the quality of construction work on Hazara Motorway as a “treat to watch” said the NHA should consult the contractor of the said road to provide consultancy on how to avoid further wastage of the public money on the project.
The prime minister also instructed to assign an investigation to the Federal Investigation Agency (FIA) to probe the award of the contract and fix responsibility on the people concerned for the poor quality of the work.
He asked the NHA to immediately stop work on the project unless the Chinese company vetted the project and provide guidelines to move ahead. The prime minister called for replicating the Hazara Motorway model to ensure better quality of work.