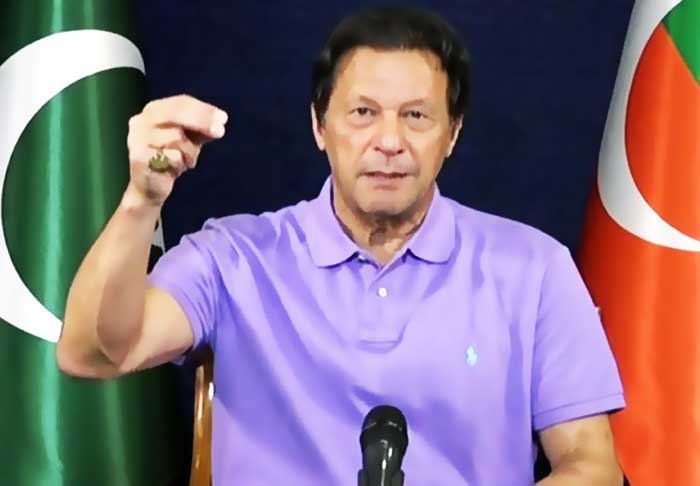 ISLAMABAD: Pakistan Tehreek-e-Insaf (PTI) Chairman Imran Khan announced on Saturday that his party would organise a power show in Islamabad’s Parade Ground and begin nationwide protests against rising inflation and amendments in the NAB law from July 2.
The former premier lashed out at the “imported government” for its bid to turn Pakistan into a “banana republic”, saying the amendments in the anti-graft body’s laws would drive the country towards destruction as Rs1,100 billion of public money looted by the corrupt mafia has been pardoned through the amendments.
Addressing people through a live broadcast on Saturday, the PTI chairman said that the current rulers wanted to silence people by spreading fear among them but urged the masses to “break the idol of fear” and come out against the imported government for the sake of the future of their children, as “thieves” were hell-bent on destroying everything.
The former premier announced to hold anti-government public gatherings in all the major cities with him addressing the main event at Islamabad’s Parade Ground on July 2. He said he had issued directives to all party workers to hold the rallies on Saturday night.
The PTI chief said that he would address the gathering at Parade Ground in the federal capital where residents of Rawalpindi and Islamabad would gather, urging PTI supporters to participate in the rallies in their respective cities for the “future of their generations”.
The ex-PM said that the “cabal of crooks” was ill-prepared to improve the national economy, as they did not have any plan to control inflation because they only focused on getting NRO-2 just like they had been awarded NRO-1 by the former military ruler Pervez Musharraf.
The former PM warned that making accountability law “weak and ineffectual” was a breach of the Constitution and underscored that the people of the country had the right to hold their elected representatives accountable for their fiduciary actions.
Imran said the PTI had challenged the amendments in the Supreme Court and expressed optimism that the judiciary would not let the “cruelty” happen to Pakistan. He said the government officials annihilated the justice system of the country to protect their loot, adding that nobody could now question the assets of the corrupt people parked abroad.
He said that after the new amendments, the details of the assets in the name of other family members could not be questioned and that the law would become effective from 1999 which would exonerate many people part of the coalition government.
“The country would become a “banana republic” as Rs1,100 billion of public looted money by the corrupt mafia has been pardoned through changes in NAB laws,” Imran said.
The corrupt rulers have overturned the anti-graft law adopted globally in which people will need to inform the authorities regarding the transactions to their accounts, he added, saying the new NAB law would increase white-collar crimes.
“The petroleum levy is going to be imposed besides increasing the oil prices, as rate of per litre petrol would be increased by up to Rs50 in the name of petroleum levy, which would further burden the common man.”
The PTI chairman warned that imposition of super tax would trigger storm of inflation, as financial burden on the industries would increase manufacturing costs, resultantly organisations would start sacking their employees and several firms would shut down.
“Farmers will bear brunt of expensive diesel and load-shedding, as the salaried segment of the society is already crushed by the inflation and now, the agriculture sector is also being destroyed,” he said.