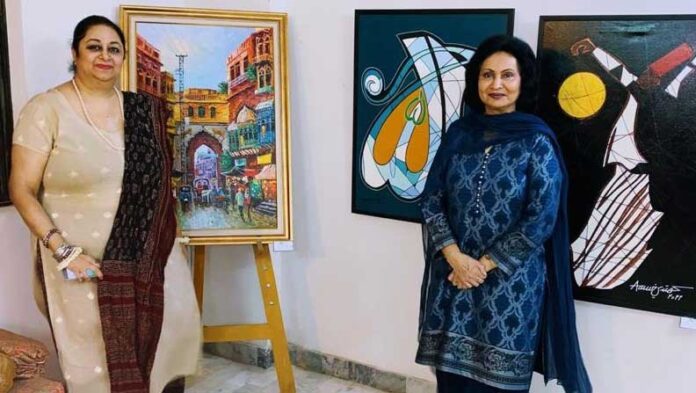 KARACHI: Majmua Art Gallery hosted a wonderful four artists show namely Sunaina Khalid from NCA, Tariq Mehmood, Ahmed Nawaz and Amir Khatri. The show was interesting as the works explored very indigenous subjects.
Ahmed Nawaz with his detailed knife and brush work highlighted the intensity of colour. Also his dervish lost in tassawuf looked amazing.
The building brought vivid memories of the old city of Lahore, the old darwazas and gates as well as the bazaars.
Amir Khatri has evolved over the years into an artist par excellence. His line work is immaculate and is subject of work was Allah in calligraphy and a dervish again in movement.
Amir Khatri has done several shows at Majmua over the years and this was his fourth show. He has exhibited in Singapore, UK, USA and a number of countries.
Tariq Mehmood’s ayat ul kursi and other suras were written in classical Arabic script and finished off with circular or triangular gold leaf giving the work a unique touch.
Tariq Mehmod hails from Faisalabad and Ahmed Nawaz and Sunaina Khalid are from Islamabad.
Sunaina’s work shows brilliance of ideas and concepts and though her intricate canvasses show the different intricate janamaz with a person reading on it. She has in her own way uplifted the stature of namaz as well as painted it in a very colourful and ethnic representation of Muslim Ummah.
She is currently still studying art and has received a number of awards. Her works speak volumes for her as she will go far. The show which was inaugurated by Mujeeb ur Rehman will continue till July 4th 2022.