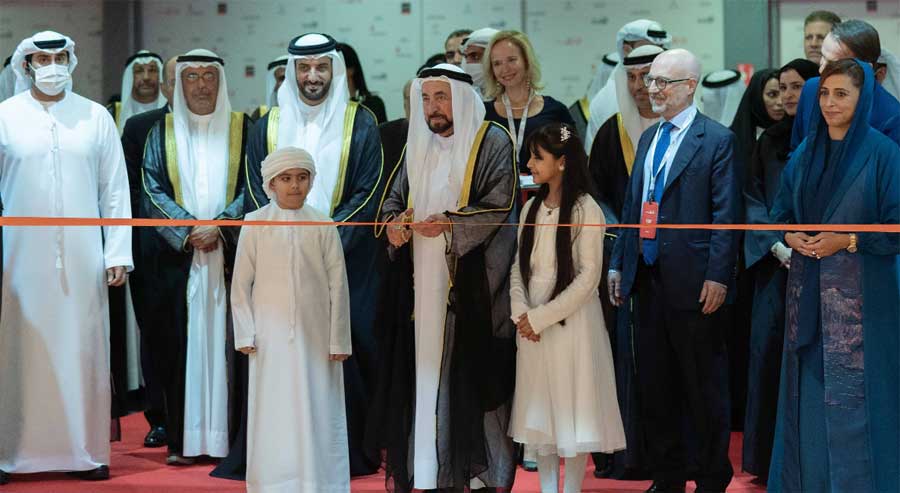 under the theme ‘Spread the Word’ The free-to-attend 41st edition of SIBF runs between 2nd-13th November with the participation of 2,213 publishers from 95 countries.

His Highness the Ruler of Sharjah marked the opening of SIBF 2022 by welcoming the gathering of eminent writers, intellectuals, publishers and leading thought leaders from the region and across the world to a vibrant new edition of the annual book fair.

His Highness said, “The opening of the 41st SIBF marks the beginning of a celebration of 12 days of cultural activities and is an opportunity for children, youth and families across the UAE to enrich their learning in arts and sciences, and forge close connections with cultures across the world through books of diverse genres at the fair.”

His Highness continued, “The past edition of the annual Sharjah International Book Fair witnessed the launch of 17 volumes of the Historical Corpus of the Arabic Language and this year, we are launching a new set of 19 volumes. These 36 volumes document nine letters of the Arabic alphabet and I would like to express my gratitude to the researchers, linguists, and experts for their untiring dedication and efforts that have led to this great accomplishment.”

In his keynote address, SBA Chairman Ahmed Al Ameri announced that for the second year in a row, SIBF had emerged as the largest book fair in the world in terms of buying and selling copyrights in 2022.

The SBA Chairman said, “The Sharjah International Book Fair has a history that spans 40 over years and has cemented the foundation of the emirate’s future for a century ahead! My hearty congratulations to Sharjah and the UAE on this momentous occasion! This feat is founded in the wise vision, unwavering support and relentless efforts of Your Highness… You have our sincere gratitude.”

After the ceremony, Dr Sheikh Sultan toured the exhibition, which opens to the public at 10am on Wednesday.

SIBF has become the first in the region to top the world book fairs for the second year in a row in terms of buying and selling of copyrights. The distinguished honour comes as the three-day SIBF Publishers Conference that hosted 1,041 publishers and literary agents concluded with 958 tables set for the matchmaking meetings.

Organized by the Sharjah Book Authority (SBA), the international book fair enables visitors to meet Booker Prize laureates, international screenwriters, and artists, in addition to exploring countries from around the world through publishers’ pavilions, Cookery Station, and a diverse