Syed Murad Ali Shah, Chief Minister Sindh met with Lin Songtian, President of the Chinese People’s Association for Friendship with Foreign Countries, who was invited to visit Pakistan, at the Sindh Chief Minister’s Office. The two sides conducted in-depth and friendly exchanges on topics of common concern, such as the global significance of the 20th National Congress of the Communist Party of China (CPC), industrial cooperation under the “Belt and Road Initiative”, and deepening China-Pakistan non-governmental friendship, and reached positive consensus. Li Bijian, Consul General of China in Karachi, and heads of relevant departments of Sindh Province attended the meeting.

Lin Songtian first introduced the important achievements of the 20th National Congress based on his personal experience and personal experience of participating in the 20th National Congress of the CPC. Leading the cause and steering the rudder to ensure that the great ship of the great rejuvenation of the Chinese nation rides the wind and waves and sails steadily and far; the important theoretical innovations, practical innovations, and institutional innovations of Xi Jinping’s new era of socialism with Chinese characteristics have been written into the party constitution, and the CPC leads the people to achieve a common goal. It provides a fundamental basis for uniting and striving for goals and tasks; it has determined the central task of comprehensively building a socialist country with Chinese characteristics with Chinese-style modernization and comprehensively promoting the great rejuvenation of the Chinese nation, and has made a comprehensive deployment.

The re-election of General Secretary Xi Jinping is of great significance not only to China and the Chinese people but also to the world and the people of the world.

General Secretary Xi Jinping has always insisted on keeping the world in mind and put forward the Chinese plan for building a better world, that is, the three major paths to promote the building of a community with a shared future for mankind and realize this great vision.

The 20th National Congress of the CPC solemnly declared to the world that China will persist in promoting world peace and development, is committed to promote the foreign policy purpose of building a community with a shared future for mankind, and is willing to work with the international community to build an open, inclusive, clean and a beautiful world promote win-win cooperation and common development between China and the world.

CM Sindh warmly congratulated the successful convening of the 20th National Congress of the CPC and said that the “hardcore” brotherhood between Pakistan and China was created by the leaders of the older generation of the two countries.

President Xi Jinping’s re-election as General Secretary of the CPC Central Committee is not only lucky for the Chinese people but will continue to lead the high-level development of the Pakistan-China all-weather strategic cooperative partnership.

The Prime Minister of Pakistan is the first foreign head of government invited to visit China after the closing of the 20th National Congress of the CPC, which fully demonstrates the particularity and high level of Pakistan-China relations.

Lin Songtian highly appreciated the friendly relations between China and Pakistan, introduced the history and achievements of China’s opening up and said that the two countries not only have a solid “hardcore” friendship but also have broad prospects for mutually beneficial cooperation. Pakistan is the priority direction of the “Belt and Road” construction.

The two sides also exchanged and docked on the establishment of several special economic zones and industrial parks in Sindh Province as soon as possible, the joint efforts to build a demonstration site for China-Pakistan mutually beneficial cooperation, and the creation of preferential policies and legal guarantees for foreign investment with regional competitiveness.

Metro Matters;Parishae Adnan showcases 25 beautiful looks of her collection at the District 19 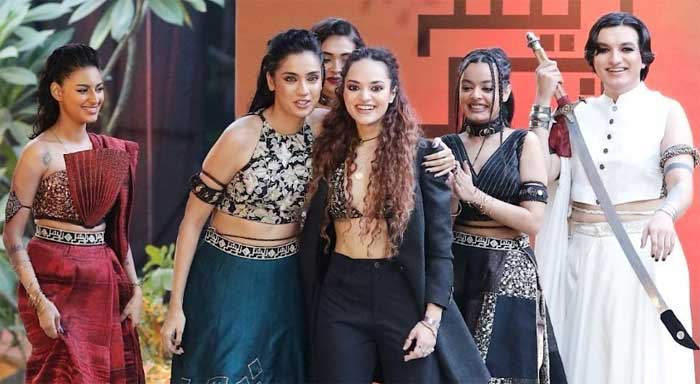 Parishae showcased her debut Fall/Winter 2022 collection this weekend. Parishae Adnan’s collection is a take on femininity, women’s empowerment and fashion, which has evolved over the years and continues to do so with the changing times. The collection consisted of a total of 25 beautiful looks.

The collection is titled “Un-Gaze,” a double-edged play on the encapsulation of the female form. It aims to vanquish the male gaze and puts the power and control back in women’s hands.

The collection emphasizes the need for sustainability and green living at the forefront. Adnan worked with an environmentally-friendly approach while designing the capsule couture collection.

Talking about the collection, Parishae says, “This collection is about coming into power and realizing that it exists. The game changes when one becomes aware of it. To be honest, I’m a little tired of men depicting what femininity should be defined as. I reject society’s version of femininity in favour of the modern aesthetic.

Muhammad Asif, a senior official of the Urdu University, coordinated this KEC- FUU meeting. Dr Muhammad Ziauddin who is keen to see the university reach to the next level discussed the performances and problems of the University with the KEC delegation.

KEC appreciated the plans of the VC to improve the performance and structure of the Federal Urdu University.

KEC proposed to the VC to set up a high-profile honorary Board from the mainstream corporate sector and civil society that involves them in the improvement affairs of the University.